The ferry service between Guyana and Suriname will resume on September 26 at 9 hours.

“The ferry that will be resuming is the M.V. Sandaka which is the Guyana flag. So that will resume to passengers and cargo and vehicles,” Minister of Public Infrastructure,Hon. David Patterson told the Department of Public Information (DPI).

This announcement was made this afternoon, following a closed-door meeting with a delegation from Suriname. The Surinamese team was headed by that country’s Minister of Public Works, Transport and Communication, Vijay Chotkan. The delegation came at an invitation of the Government of Guyana.

Minister Paterson explained that the M.V. Sandaka will perform the task, as the M.V. Canawaima is scheduled for repairs after experiencing mechanical problems some months ago and remains docked.

He said both teams have been able to agree on most of the matters discussed, however on a bilateral level Guyana and Suriname will need to review a Memorandum of Understanding signed in this regard some 20 years ago.

“At our invitation, Minister Chotkan came over so we can have an update on where we are at, and what we can do to resume the service. It was a very good meeting we were able to discuss several of our challenges and we have agreed on almost all and those that we could not agree on today, we put a timeframe and mechanism to have it agreed upon,” Minister Patterson said.

The ferry service was suspended in May after the M.V. Canawaima began experiencing mechanical problems. 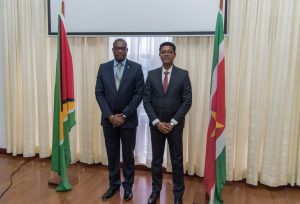 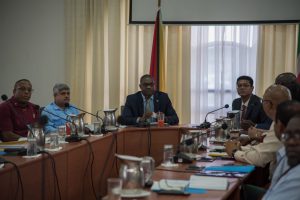 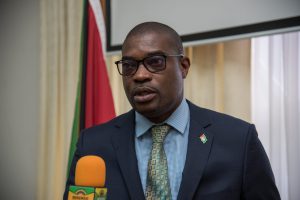 In the meantime, Suriname’s Minister of Public Works, Transport and Communication, Vijay Chotkan also told DPI that he too was pleased with the outcome of discussions.

“We had a very fruitful meeting, we talked about a lot of issues that needed to be dealt with like when to start the service. Right now, the Canawaima is in the docks for repairments and that is one of the things we talked about… The Canawaima will be in service by October 15th,” Minister Chotkan assured.

Both sides have also discussed the need for improvement in the service provided to passengers, as well as infrastructure development at both the Moleson Creek Terminal and at the South Drain over in Suriname.