What is known in today’s world as steelpan or steel orchestra is very common in Guyana, though originating in Trinidad.

Some of Guyana’s adroit steelpan players are attending CARIFESTA XIII. On Tuesday night at the Christ Church Foundation School, Guyana’s steelpan team entertained the audience with exuberant performances that brought the cheering crowd to their feet for standing ovations.

Musical Director, Andrew Tyndall is very proud of his team of hard and dedicated workers. 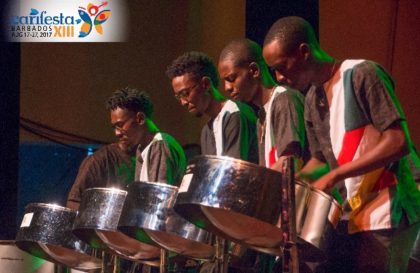 some of the Guyanese steelpan players engrossed in their performance last night at the Christ Church Foundation School.

Tyndall said the team has been preparing for CARIFESTA since March and the performances displayed so far are beyond expectations. According to him, the National School of Music in Guyana has developed a strong music programme which includes the steel orchestra.

“We have been grooming young people in music education by teaching them music literacy and practical skills, so what you saw tonight was a result of those works. Also, in keeping with government’s push to reintegrate music in the curriculum we’ve been pushing to ensure we have qualified instructors so those persons performing tonight are part of the core of instructors who will be working to expand the steelpan in school,” Tyndall highlighted.

The Music Director is confident his team will continue to thrill and entertain the large crowds at CARIFESTA XIII.

Fifteen-year-old Jaheim Jones the youngest pan member is overjoyed to be at his first CARIFESTA. Jones said he choose steelpan because “he always liked steelpan and it appealed to him and he is proud to represent Guyana.”

Jovanka Williams, one of the few females in the group of mainly boys (orchestra) is great. She noted that she didn’t choose steel pan but rather it chose her. “I have been doing this since six, so it was just a part of me, I can’t stop. When we play for people, the excitement on their face gives me life. I love it!! I’m proud to be a female ambassador for Guyana.”

Dedicated member, Javier Marks has been playing steelpan for nine years. Marks never had an interest in steelpan but while involved in work study some years ago he began playing.  That same year he went to his first CARIFESTA event and has never stopped playing.

Marks encouragement to young people who might want to pursue steelpan playing, “Dteelpan is a world voice right now in Trinidad, Barbados and other countries. It has lots of opportunity, look at us we’re here at CARIFESTA and this could be you; we’ve also done other festivals in other countries. Music is fun and you will not regret this.”

Tassa drumming is widespread in India and some Caribbean countries including Guyana, and it also originated in Trinidad.

In Guyana, Tassa drumming is primarily associated with Indian weddings and festivals. It invites exploration of the distinctive nature of the Indian Diaspora and its relationship to its ancestral homeland whilst being influenced by the Caribbean music culture. 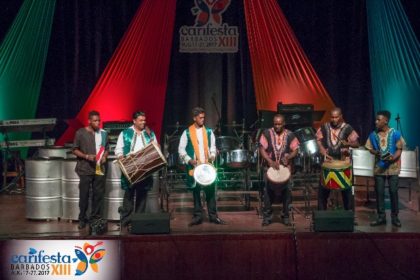 The magnificent performance was well received from the cheering crowd. Excited and proud Dubraj expressed gratitude to the government for the opportunity to be at CARIFEST XII. “While we are experienced and would have travelled many places, we are thankful to come here and showcase our Guyanese culture. Tassa drumming is a big thing back in Guyana and we ae excited to play it here, CARIFESTA began in Guyana in 1972 and we are proud to represent Guyana.”

Head of the Otishka Drummers, Mark Cyrus, was delighted to be showcasing his rich African culture at yet another CARIFESTA. Cyrus said “Otishka means brotherhood, togetherness, we are here to promote Guyana at CARIFESTA and we are proud to do so.”

CARIFESTA XIII continues and the Guyanese contingents will continue to excite the crowds with their various performances, showcasing Guyana’s rich and diverse culture.