Scores of Guyanese in Ontario, Canada, flocked the Mel Lastman Square on Yonge Street in the capital Toronto, on Friday May 24, to celebrate Guyana’s 53rd Independence Anniversary in a moving flag raising ceremony held under the auspices of the Consulate General of Guyana in Toronto.

Among the dignitaries at the ceremony, which featured an address by Guyana’s Consul General to Toronto, Ms. Anyin Choo, were Ontario Legislator of Guyanese heritage, Ms. Sara Singh, MPP, who represents the Town of Brampton in the Provincial Parliament; Councillor Ashmeed Khan of the Town of Ajax, also of Guyanese heritage; and members of the Caribbean Consular Corps in Toronto.

The national flag, the Golden Arrowhead, was hoisted against a sunny spring sky and a steady wind, by former members of the Guyana Defence Force (GDF), residing in Canada, following a simple marching parade and salute.

Following a brief welcome by Master of Ceremonies, Ms. Grace Joseph, Consul at the Consulate General of Guyana in Toronto, Guyanese-Canadian vocalist and recording artiste, Ms. Faith Amour, sang the National Anthems of Guyana and Canada at the event, which also attracted an audience of Canadian citizens from the commercial hub in the busy Yonge Street Corridor, near the North York Civic Centre.

Prayers were led by representatives of the three major religions in Guyana, Brother Omar Farouk of the Muslin faith; Pandit Joe Jaglall of the Hindu community and Bishop Joseph Fisher of the Christian faith.

Consul General Choo, in her feature address, noted the centuries of struggles and resistance by our ancestors, against colonial rule.

Ms. Choo urged: “As we celebrate yet another milestone in the history of our country, let us not forget the sacrifice made by our founding leaders and the struggles made in unity across diversity for our nation…for us, the future generation, and for the future generations to come.”

The Consul General assured that Guyanese are living in a nation that is committed to the rule of law, the independence of the judiciary, freedom of the press, and respect for fundamental human rights and democracy.

“Today, we are fortunate to celebrate our cultural diversity in a multicultural society that promotes citizens’ unhindered devotion to their respective religions and cultures because Guyana is a land of six peoples; a kaleidoscope of colourful diversity and multi-ethnicity, none of which would be possible without the unified efforts of our nation’s founding fathers who fought for the independence of Guyana,” Ms. Choo emphasised.

Guyanese in attendance were told that as a young nation, Guyana still faces many challenges in the 21st century such as challenges to its territorial integrity, national security, economic development, trade liberalization and globalization, and climate change, which threatens the country’s very existence. 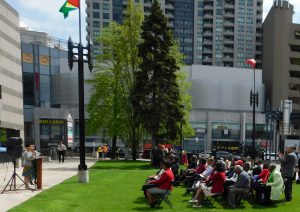 According to the Consul General, in the face of the realities Guyana faces, Guyanese must recognize the need for unity. “Our ability to achieve unity in diversity will be our greatest challenge as a nation, and so I wish to urge all Guyanese, let us embrace each other and work in unity to overcome the challenges that lie ahead as a nation,” she added.

Recognising that within a matter of months, Guyana will become an oil producing nation, a step which will, hopefully, transform the economy, better the lives of the citizens and further the social and economic progress, Ms. Choo observed that as a small developing country, Guyana is constantly faced with the challenges of choosing between its own existence and its economic survival.

On environmental initiatives, is was disclosed that despite its huge oil finds, Guyana has committed to reducing its carbon footprints and has taken steps to transform its economy into a green economy through the Green State Development Strategy.

“As citizens of Guyana, we must ensure that our natural resources are utilized in a transparent and sustainable manner that will benefit and improve the lives of our fellow Guyanese and protect the environment for future generations…this can only happen through a collective effort towards one goal…the development of our homeland, Guyana,” Consul General Choo reiterated.

The Guyana representative in Toronto declared that on this historic day of Guyana’s independence, citizens should recognise and reflect on the importance of working in unity by cooperating and embracing each other as equals.

Meanwhile, in brief remarks, Ms. Tania Lopez Larroque, Consul General of Consulate General of the Republic of Cuba and Chair of the Caribbean Consular Corps, spoke of the cooperation among Caribbean nations in instances of natural disasters and other challenges. According to Cuba’s representative in Toronto, Cuba and Guyana have had a long history of collaboration and cooperation in many areas, especially on Agricultural projects.

The vote of thanks was done by Mr. Gerald Whyte, Consul at the Consulate General of Guyana in Toronto. A reception was held at the consulate immediately following the flag raising ceremony.