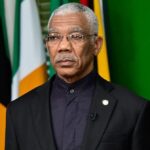 His Excellency President David Granger has indicated that the Guyana Sugar Corporation is set to receive funds this week.

He made this disclosure on Sunday at State House while addressing media operatives.

“As the Ministry of Finance announced, we have made arrangements for money to be available this week…this is considered as bridging finance,” he said.

President Granger said it is very unfortunate to be in this position and further noted that throughout the tenure, the coalition has been engaged in trying to resolve the issue of the industry.

In a letter to President Granger on May 15, Chairman of GuySuCo’s Board of Directors, John Dow, said the sugar corporation was in a “dire financial crisis” with billions in debt, and insufficient finances to execute critical factory maintenance.

The A Partnership for National Unit and Alliance for Change (APNU+AFC) coalition government had presented a “White Paper” to the National Assembly which outlined the administration’s plan to resuscitate the sugar industry.

The plan was presented by Minister of Agriculture Noel Holder and was dubbed the ‘State Paper on the Future of the Sugar Industry’.