The Hamilton Green Pension Bill was passed this evening after lengthy arguments by both sides of the National Assembly.
It was read for the second time by Minister of Finance Winston Jordan. The minister stated that the Bill was tabled to enable the only prime minister who has never received an adequate pension to do so. According to the Finance Minister, the Bill was “an opportunity to treat Green with the dignity he deserved.” 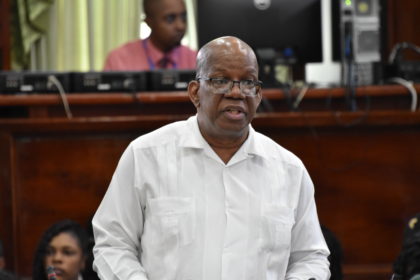 Opposition Member of Parliament Anil Nandlall, questioned the Bill’s provisions, likening them to “tokenism.” He asked why similar adjustments were not being made for public servants and teachers. Adjustments must be made in an evenhanded way, he said.
Supporting the Bill, Minister with responsibility for Labour, Keith Scott implored the House not to examine the conduct of the former Prime Minister, but to ascertain whether he was deserving of a fit and proper pension after yeoman service to the nation. Minister Scott added that the adjustments made to the former President’s Bill were quickly capped when Government took office in May, 2015.
Opposing the Bill, Member of Parliament (MP) Gillian Burton- Persaud questioned the “indexation” of the Bill. She asked why a similar process was not used to calculate the pensions of public servants, saying, “It should be all for one and one for all.”
MP Persaud also called for similar provisions to be made for former Parliamentarians. 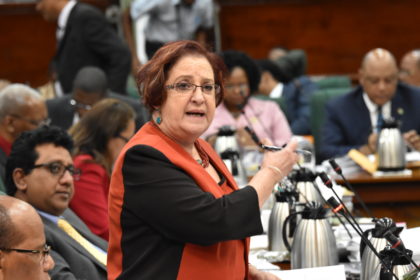 The final speaker for the People’s Progressive Party, its Chief Whip, Gail Teixeira, defended the calls for the pension not to be awarded. She stated that arguments about Mrs. Joyce Hoyte being denied her late husband’s pension was due to bureaucratic red tape. She questioned how the former Presidents such as Donald Ramotar, Sam Hinds and Bharrat Jagdeo would be treated in the future due to the changes or caps placed on the presidential benefits by the Government. She added that her party was not opposed to Green getting an ex-gratia (one off) payment instead of a pension as the legislation was “out of order and unconstitutional.”
Adding his voice to the Government’s side was Attorney General Basil Williams. He reminded that the once off Bill “will correct a historical wrong.” He noted that the former President’s bill catered for past Presidents and only one Prime Minister with “uncapped benefits.” He described as repugnant the fact that the controversial Bill was then modified to cater for one person, former President Bharrat Jagdeo. This adjustment saw Jagdeo’s pension being linked to 7/8 of the serving President’s salary and “each of his successors on perpetuity.” 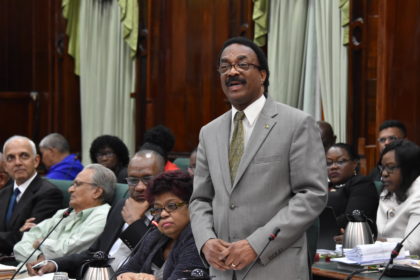 He noted that special pensions were set aside for Mr. A. Chung, George Walcott and several other notable personalities. He called on the House to stop being cruel to each other, as when the power shifts in the Parliament they will need compassion.
He said the Bill would enable Green “to live a life of dignity he deserves.”
Delivering his closing arguments, in support of the Bill, Finance Minister Jordan said that injustice anywhere is injustice everywhere. He added that when principle has to trump personality, the result was what occurred in the National Assembly with the Opposition resorting to attacking personalities. He recalled that whilst public servants were only getting five percent increases, President Jagdeo’s salary was adjusted more than 300 percent.
The Minister reminded that the Bill capped Green’s pension to 7/8 of the current Prime Minister’s salary. He described the Bill as fitting for someone who is 82 years old, served Guyana and “rights a wrong that should have been corrected a long time ago.”
The Bill was then read for a third time and passed in the National Assembly.
By:Paul McAdam