The Hilux vehicles were welcomed by the REO’s all of whom noted that it would assist in addressing the needs of their respective regions. The six vehicles cost approximately $64M.

Region 9, Upper Takutu-Upper Essequibo received four of the six vehicles. REO Carl Parker noted that the trucks will assist in the areas of education, health and regional administration and finance. He also noted that they will also assist in ensuring persons are paid on time.

“We always have challenges in paying salaries in the region and you would appreciate that is 23 thousand square miles… we currently have two vehicles but they are shared. These vehicles will greatly improve the delivery and ensure that communities have access to the regional administration and its programmes,” Parker explained. 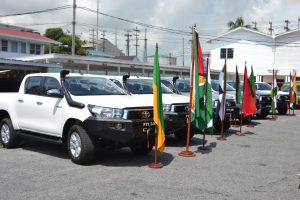 The six vehicles handed over to the various regions 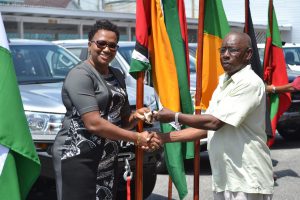 Regional Executive Officer of Region 1, Barima-Waini, Randolph Storm receiving the key to the vehicle from Minister within the Ministry of Communities, Hon. Annette Ferguson 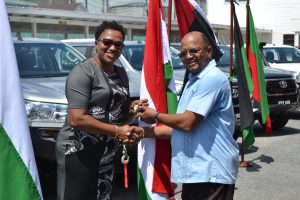 Regional Executive Officer of Region 9, Upper Takutu-Upper Essequibo, Carl Parker receiving the keys to the vehicles from Minister within the Ministry of Communities, Annette Ferguson 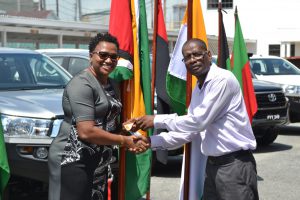 Regional Executive Officer of Region Seven, Cuyuni-Mazaruni Kerwin Ward receiving the key to the vehicle from Minister within the Ministry of Communities, Hon. Annette Ferguson

Region Seven’s REO, Kerwin Ward said the vehicle will be instrumental in the Cuyuni-Mazaruni administration executing its work plan. “In education, the vehicles will assist us to properly monitor and evaluate our schools and health sector. It will ensure the drugs and medical supplies go to the last mile, to ensure our health centres have supplies,” he underscored.

REO Randolph Storm said the vehicles would save Region 1, Barima-Waini much-needed revenue which is expended on travelling around the region. “Our region is so big and the amount of money we have to spend to move from point A to point B is a lot. For example, Port Kaituma to Baramita is $500,000. So, this will not only give us the ability to move and get our work done but this will bring a lot of savings,” Storm highlighted.

Minister Ferguson said the handing over of the vehicles indicates the government’s commitment to ensuring the regions have the required resources to execute its duties since the government recognises the challenges they face with accessibility in the hinterland.

“Since we came into office in 2015 to 2019, we have seen tremendous growth in the budgetary allocations for the various regions by 158 percent… that in itself would indicate the government’s commitment to ensuring our respective regions, especially the hinterland regions are outfitted with the necessary resources.”

In October, Regions 9 and 7 will be receiving another two vehicles each. The minister urged the respective REOs to ensure that the vehicles are well maintained.