─ “If we are going to promote connectivity, these are the initiatives that are necessary to facilitate the movement of people, goods and services” – PM Nagamootoo

─ countries must continue to improve compliance with ICAO global standards, and foster an operating environment under which the industry can enjoy dependable and sustainable profitability – Pres. of ICAO

Delegates from a number of countries, including Singapore and several African nations, were all present for the official opening of the 2018 meeting of the International Civil Aviation Organisation at the Arthur Chung Conference Centre (ACCC) this morning.

The objective of this Air Transport Meeting is to proffer practical solutions to remove existing regulatory impediments to air transport liberalization and to finance the development of quality aviation infrastructure, with the follow-up to the ICAO Statement on the Development of Air Transport in North America, Central America, the Caribbean and South America. 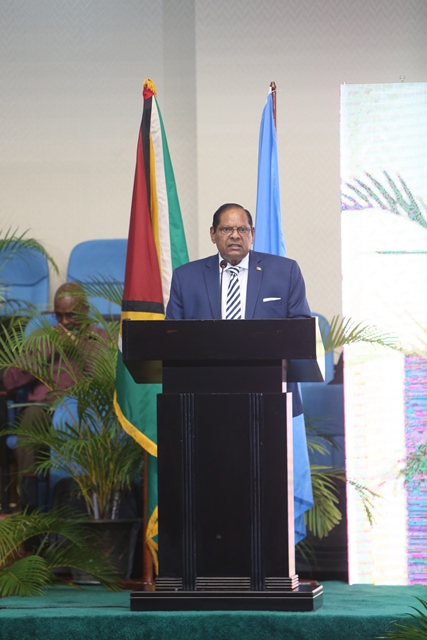 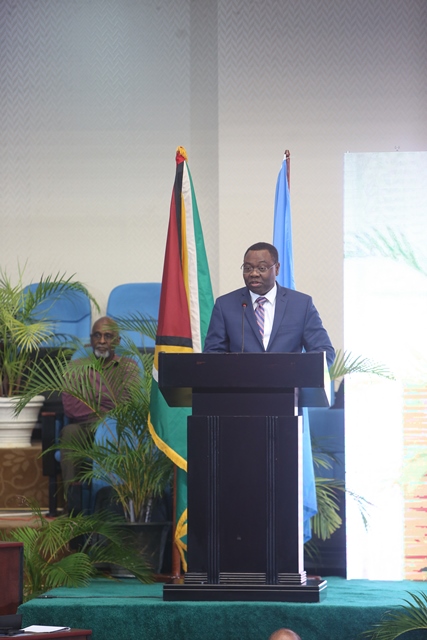 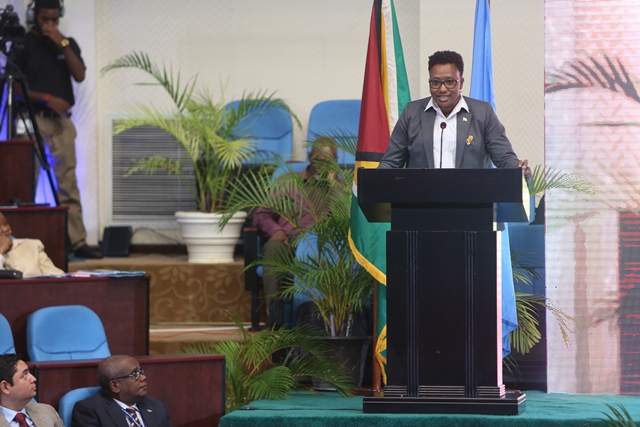 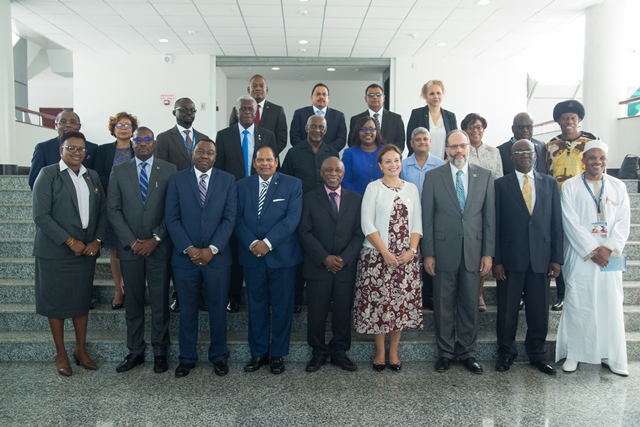 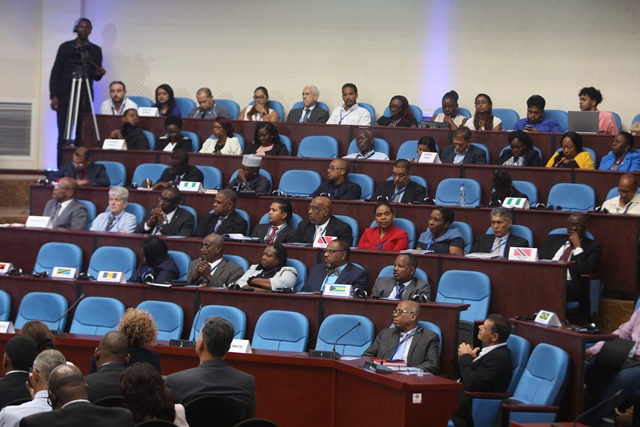 Participants of the 2018 meeting of the International Civil Aviation Organisation (ICAO) at the Arthur Chung Conference Centre. 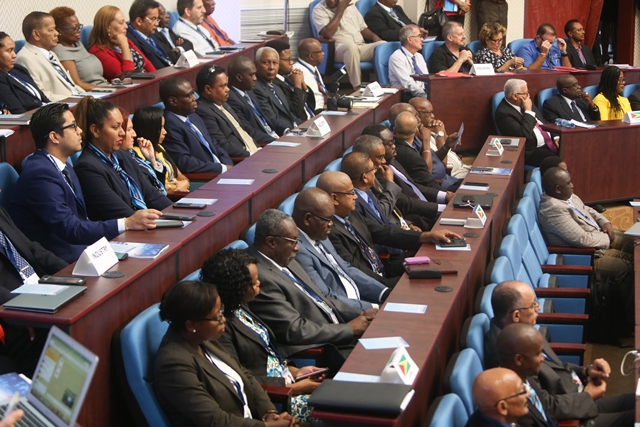 Participants of the 2018 meeting of the International Civil Aviation Organisation (ICAO) at the Arthur Chung Conference Centre.

Delivering the feature address, Prime Minister, Moses Nagamootoo told the participants that, “the time is now when you must be turning words into action”. He noted that the meeting is being held in Guyana at a time when the country’s aviation industry has strengthened itself with a revised Civil Aviation law, which was approved by our National Assembly on Monday last.

“Aviation in Guyana is the primary channel to connect internationally. With a land space of 83,000 square miles, some 80 per cent of which is pristine, tropical rainforest, aviation is vital to connecting our coastland with riverain and hinterland communities, most of which are populated by our Indigenous peoples. Our aviation sector is moving in the right direction and is growing. In 2017, Guyana recorded its highest international passenger movement in the history of the aviation sector – in excess of 650,000 passengers. Guyana’s compliance with ICAO Standards and Recommended Practices are up – increasing from 44 per cent to 64 per cent – with projection to reach at least 80 per cent by December 31, this year,” PM Nagamootoo said.

With first oil mere months away, the Prime Minister noted that Guyana is becoming an attractive market for airlines, and a preferred business and tourist destination. Last week, American Airlines made its inaugural flight to Guyana.

In the Caribbean region, air transport is a critical factor for the viability and sustainability of the tourism product which the Caribbean sells. According to PM Nagamootoo, the Caribbean region is always looking at new ways to promote connectivity because of the spread of the different states across the region and the small size of many of the islands in the region.

In July 2018, the Heads of Government of the various CARICOM Member States approved for signature, a liberal, Multilateral Sir Services Agreement (MASA). This allows for free movement of airlines within the CARICOM region to operate unimpeded in any member state.

“It is our Government’s view that if we are going to promote connectivity, these are the initiatives that are necessary to facilitate the movement of people, goods and services,” he reiterated.

Minister within the Ministry of Public Infrastructure, Annette Ferguson noted that the meeting is a very important one for Guyana and the rest of the region. She explained that it is building on the outcomes of other meetings including the ICAO Regional Air Transport Conference which was held in Montego Bay, Jamaica; the Forum on Tourism and Air Transport for Development in Medellin, Colombia; and the South American Regional Directors Meeting in Paraguay; and the Promoting Air Links between African States and the Diaspora held in Accra, Ghana.

Minister Ferguson, with responsibility for overseeing the work of the Guyana Civil Aviation Authority, emphasised that she is pleased with the progress Guyana has made with its obligation under the Chicago Convention.

“The Government fully supports the aviation sector and this reflected in many ways; the number of bilateral agreements negotiated with other states. Just last December, 21 air services agreements were approved by the Cabinet for signature and many of those agreements are between Africa, European and Asian states.”

Minister Ferguson said that Guyana remains committed to fostering the development of air transport within CARICOM, as the country was among the first two countries to sign the new multilateral air services agreement for CARICOM states.

ICAO’s President, Dr. Olumuyiwa Benard Aliu pointed out that one of the greatest benefits of aviation is linking people, places and cultures, and therefore, ICAO continues its efforts to create air links between the African states and the diaspora, which will eventually result in significant social and economic benefits for both regions.

Dr. Aliu explained aviation has become an essential component of our global society and is a crucial driver of economic, social and cultural development worldwide. Air transport is, by far, the safest mode of transportation and today, it secures more than 52.7 Million jobs globally and generates some $7.7 Trillion in economic activity. International aviation carried 4.1Billion passengers and 56 Million tons of freight on 37Million flights in 2017. According to Dr. Alui, these figures are projected to double in the next fifteen years.

Therefore, Dr. Aliu said countries must continue to improve compliance with ICAO global standards, and foster an operating environment under which the industry can enjoy dependable and sustainable profitability. Such efforts should include the liberalisation and modernisation of the regulatory framework for International Air Transport.