Judiciary careless in the granting of bail-Police Commissioner

The judicial system is insensitive in the dispensation of bail towards defendants who are charged with committing serious crimes the Acting Police Commissioner David Ramnarine said.

Acting Police Commissioner in a press briefing today at the Police Public Relations Office, Kingston said bail should be a deterrent to crime. “The amount of bail granted in the court makes a mockery of how responsible people in authority should behave in these matters,” the Commissioner said. 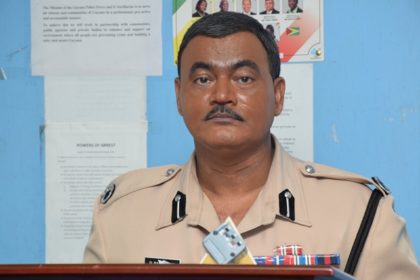 Highlighting one recent incident, Commissioner Ramnarine said the prime suspect in the recent robbery murder of a Brazilian national in F Division was granted bail by the Court twice for two separate serious crimes: unlawful possession of a firearm and larceny. “How can we be so insensitive in our dispensation of the granting of bail,” the Commissioner questioned.

Commissioner Ramnarine said that he will not allow the Guyana Police Force (GPF) to be criticised for the failures of the other components in the criminal justice system. “I will not take responsibility for the behaviour of other people who constitute and have a role to play in the criminal justice system. I can only defend our actions in the Police Force,” the commissioner vehemently expressed.

The Commissioner also lashed out at critics over their “insinuations about fabrications and concoction” of the recent crime statistics which show that there is a decrease in serious crimes.

Commissioner Ramnarine said that these statements “only serve to embolden criminal elements”. “They are in the main not really concerned with safety and security of those they claim to represent or speak for…they serve to glorify and support the actions of criminal elements because of the contextual nature in which a few serious crimes, in particularly those involving the use of firearms are glamourized and emphasised,” Ramnarine said.

Serious crimes, involving the use of firearms remain a challenge for the GPF. However, Commissioner Ramnarine said that the GPF is working assiduously to make progress in recent cases. “Within the last few days, of the five robbery murders that we’ve had, we basically are going to be able to make the kind of progress that people in this country can be satisfied with,” Ramnarine assured.

There has been a reduction of reported robberies involving the use of firearms when compared over the last three years, the Acting Commissioner pointed out.

Statistics of robberies involving the use of firearms over the last three years during the period September 1 to October 20:

While the increase of this type of serious crimes in D Division remain a concern, Commissioner Ramnarine said he has tasked the Divisional Commander to work towards reducing the crime rate in that division.

Addressing the calls for greater collaboration the Commissioner said, “We have an acceptable level of support of some NGOs, key ministries, community policing groups, some elements of the corporate sector and an increasing number of persons in the religious fraternity.” Added to these, the GPF will continue to sustain and maintain its social crime prevention programmes, Ramnarine added.