As part of the preparatory efforts, the Ministry of Legal Affairs today hosted a seminar for the Guyana Delegation to the Caribbean Financial Action Task Force (CFATF) 46th Plenary and Working Group meetings to be hosted in Guyana from November 12-16, 2017, at the Marriott Hotel, Georgetown. 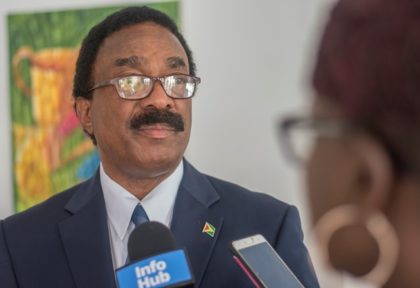 Attorney General and Minister of Legal Affairs, Basil Williams, S.C, said the event is an important one for Guyana and comes at a time when the effects of money laundering and terrorist financing are being felt worldwide.

When this administration took office in May 2015, Guyana had been blacklisted both by the CFATF and the international body, the Financial Action Task Force (FATF), however, the efforts of the government, particularly that of the Attorney General’s Chambers, led to Guyana exiting that process in “record time.”

“We must emphasise the role of the President, Brigadier David Granger, from the onset, he gave the FATF the high political commitment that Guyana would work with FATF and the CFATF to implement the recommendations, so that Guyana could contribute to ridding the world of money laundering and terrorist financing,” the AG highlighted.

The meetings will cover a wide range of financial and security matters, such as beneficial ownership, requirements for customer due diligence and for persons such as politicians, enhanced due diligence. Of importance to the region is the matter of de-risking or de-banking.

Minister Williams said a compliance meeting will be held to determine if member countries in the third round of assessment are eligible to exit that process. Some of these countries include Haiti, St. Vincent, and St. Martin.

Asset recovery and more importantly, the mutual evaluation of Barbados is on the agenda. Minister Williams noted that “They have a report in and we are going to be assessing the report and that will determine their status, whether or not they have satisfied or done enough to exit the fourth round because the fourth round is the round the look for effectiveness.”

The third round of assessment requires that legal, regulatory and administrative frameworks be instituted, while the fourth round, “(CFATF) will be looking to see convictions, so that you can’t come and say you have a thousand charges or a thousand matters went to court, but then you don’t have any convictions, you would be rated very poorly for the level of effectiveness,” the AG said. 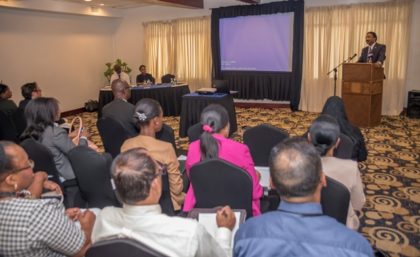 Representatives at the seminar.

Guyana is currently in the fourth round of assessment and is due for evaluation in 2022, however, the AG highlighted the importance of remedying the deficiencies.  To this end, a national risk assessment was executed, from which the Government was able to identify its risks at the various reporting and supervisory agencies. The Minister said that “We would have to direct our resources towards remedying the high-risk areas. I could tell you that the highest risk areas are the money transfer agencies and the designated non-financial businesses and professions.”

A decision was made by CFATF to constantly review the status of countries; therefore, Guyana will be under continuous review by the financial body until its evaluation in 2022.

The seminar held for the Guyana delegation included presentations by Principal Parliamentary Counsel, Joann Bond, Director of the Financial Intelligence Unit, Matthew Langevine, Special Adviser to the Attorney General, Tessa Oudkerk, among other local representatives from agencies such as the Guyana Revenue Authority and the Special Organised Crime Unit (SOCU).

Over 160 representatives from 25-member countries and supporting international agencies such as the International Monetary Fund (IMF), will be in Guyana for the CFATF Plenary and Working Group Meetings.