The revitalization of a local Language Institute at the University of Guyana (UG) is critical to the preservation of Guyana’s traditional knowledge, said Minister of Indigenous Peoples’ Affairs, Sydney Allicock.

Minister Allicock was speaking at the opening of the 2017 Amazon Cooperation Treaty Organization (ACTO) Traditional Knowledge Meeting on Thursday, at the Princess Ramada Hotel, Providence. 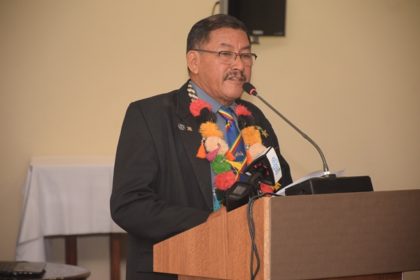 He posited, “Any discussion on Indigenous Knowledge must include language retention.” Minister Allicock explained that language has a direct link to knowledge and the survival of our culture, hence the need for such an institution, specifically targeting youths.

He also believes that there is need to establish a Hinterland Green Enterprise Development Centre to prepare young minds for the anticipated development. “I see the need for a sense of urgency in that regard”, he pointed out.

“In this way, Guyana can offer leadership in some of the areas, I have identified. Indigenous peoples have a role to play in national unity and development.

There are many richness, knowledge, and research that contributes to the development of medications, cosmetics, agriculture, tourism among others found in our environment”, Minister Allicock explained.

He further added, “In the context of Guyana, it is a well-known fact that traditional knowledge has contributed in immeasurable ways to the success of countless international researchers who have read for their Ph.D. degrees having been guided by our local Indigenous peoples”, Minister Allicock noted. He further noted, “Research has turned out to be no different from the extractive industry. They came, they learned and they left. The information of traditional knowledge which was extracted, benefits the researchers band their principles and associates and our villages see little or no benefits.”

In this regard, his ministry is currently working with other organisations on a project entitled ‘Integrated Traditional Knowledge into National Policy and Practice in Guyana’ to craft an ‘Action Plan’.

“There is also an urgent need to also find ways to arouse our youths. We must find ways to make and keep the young among us interested in their culture, history, customs, and practices. In this regard, Guyana had proposed the establishment of an Indigenous Youth Forum of ACTO. The draft concept note has since been prepared and dispatched”, Minister Allicock further explained.