─ hopes to get rid of cumbersome oxygen tanks

The Ministry of Public Health has handed over an oxygen concentrator to the Mabaruma Regional Hospital in Region 1.

According to the acting Regional Health Officer of the region, Dr. Vishal Ramjas, “what it [oxygen concentrator] does is it moves away from us carrying around these heavy cylinder tanks of oxygen and what it does is it uses the air or the oxygen in the environs and convert it into medical air, so this will decrease one’s expense.”

An oxygen concentrator or oxygen generator, as it is commonly called, is a medical device used to deliver oxygen to those who require it.

Usually, patients requiring medical oxygen do so from a heavy tank which weighs about 130 lbs (65kgs) and stands about 5 feet tall. People may require it if they have a condition that causes or results in low levels of oxygen in their blood. 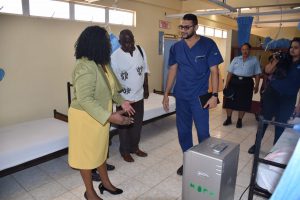 Minister within the Ministry of Public Health, Dr. Karen Cummings being briefed on the uses of the oxygen concentrator 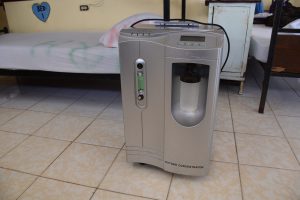 The Oxygen Concentrator at the Mabaruma Regional Hospital

This is essentially difficult to be transported in and around the medical facility and is regarded as a cumbersome medical apparatus. The oxygen concentrator can weigh as little as 10lbs.

During a recent visit by Minister within the Ministry of Public Health, Dr. Karen Cummings, the acting RHO indicated that the regional administration is projecting to include portable oxygen concentrator units in their 2020 budget.

These units along with the one that is currently functioning at the hospital will eventually eliminate downtime that comes as a result of having to wait for oxygen cylinders to be refilled and delivered, putting lives of persons in need of it at risk.