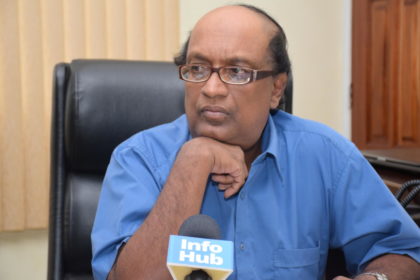 Chief Executive Officer (CEO) of the National Agricultural Research and Extension Institute (NAREI), Dr. Oudho Homenauth told the Department of Public Information (DPI) in an interview, that the action taken was due to research carried out on the use of the spartina grass, especially due to boosted support to the mangrove restoration project it recieved.

“Studies would have shown that once you have these structures which is basically low-cost groins. They can lead to restoration exercises like we would have seen currently in Lima on the Essequibo coast where the structure that we have there, over the last year or two would have shown that mangroves, you can actually not necessarily plant them but you get natural regeneration,” Dr. Homenauth explained. He noted that though spartina grass is not native, it is suitable for those environments.

Spartina grass commonly known as salt-water cord grass is noted for its capacity to act as an environmental engineer. It grows out into the water at the seaward edge of a salt marsh, and accumulates sediment and enables other habitat-engineering species, such as mussels, to settle. This accumulation of sediment and other substrate-building species gradually builds up the level of the land at the seaward edge, and other, higher-marsh species move onto the new land.

Dr. Homenauth noted the vision proposed, earlier this year by the Ministry of Agriculture, will be recognised within the next quarter (October).  “I know for sure that what we would have proposed in terms of the beginning of the year, would be realised within the next quarter. At least, by October we expect those structures to be in place and then provide the benefits… in terms of restoring the shoreline with mangroves, obviously to prevent or to provide additional support to the seeding fences in terms of reducing over-topping”, Dr. Homenauth explained.

Over $40M was allocated for financing the mangrove management/restoration and NAREI will use the funds for planting, monitoring and creating structures.

The United Nations Educational, Scientific and Cultural Organisation (UNESCO) has dedicated July 26 as International Day for the conservation of mangroves towards recognising its importance and value to the environment.

During Minister of Agriculture, Noel Holder’s 2017 budget speech, he praised the performance of the mangrove management/restoration project of 2016, noting that it contributed to the overall performance of the agriculture sector and will continue to do so in 2017.