The streets of the Buxton/Friendship community will soon be brighter. This follows the donation of 20 LED lights and poles by Minister of Natural Resources, Hon. Raphael Trotman. The gesture is a promise fulfilled by the minister following a request made by residents during a recent community meeting. Speaking on behalf of the residents, Proprietor of the Service Station in the community, Morris Wilson said that the community deeply appreciates the gesture. “I feel great and appreciate this effort, not only for me but for the community at large. We needed more lighting, and we thank the minister for taking the initiative to provide additional lighting for this community,” Wilson stated. 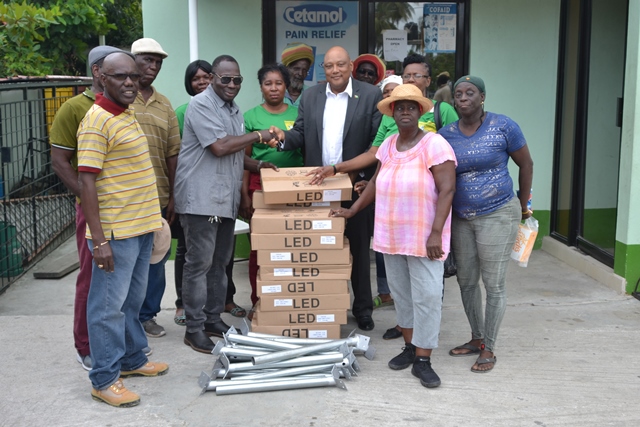 Minister of Natural Resources, Hon. Raphael Trotman handing over the LED lights and poles to Morris Wilson, flanked by other residents of the community. 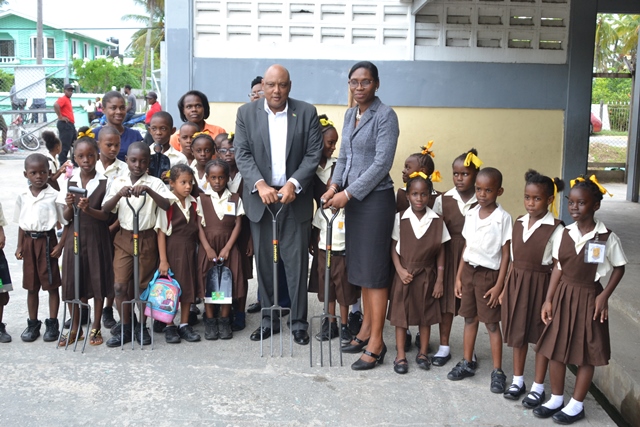 Minister of Natural Resources, Hon. Raphael Trotman handing over the farming tools to Headteacher of the Buxton/Friendship Primary School Yulanda Adams-Blair, flanked by students of the school.

He explained that “the lights will be erected in the areas that most need them. We would like to look at the intersections where they would have more effect.” He further highlighted that the lights will provide additional security for residents of the community.

Chairman of the Buxton/Friendship Community Development Council (CDC), Oswald Williams also echoed similar sentiments. He said, “as the CDC Chairman, we asked for something on our behalf, and it was delivered.” Williams is also of the view that with the erection of the lights, residents of the community will feel much safer at nights.

Additionally, Minister Trotman delivered farming tools to the Buxton/Friendship Primary School. Headteacher Yulanda Adams-Blair made the request for the tools during a community meeting hosted by Minister Trotman. The school received cutlasses, forks and hoes.

Adams-Blair said that the school does not have a garden at the moment but it is the direction in which the institution is heading; adding that the tools will go a far way in getting the garden up and running. With the tools in hand, the Headmistress explained that talks will be held on Friday then the following week, parents will be asked to come in and assist with the digging of the garden.