Minister of Public Health, Volda Lawrence said that there needs to be greater collaboration among ministries and agencies to combat social issues. The Minister was at the time speaking with media operatives after visiting a Bareroot, East Coast Demerara woman who allegedly ingested poison and gave her three children also. 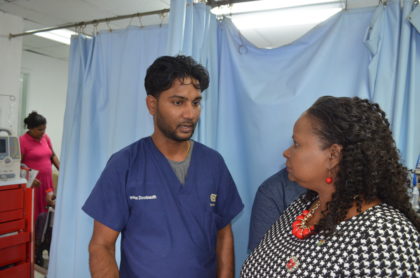 Minister of Public Health, Volda Lawrence and Dr. Balram Doonauth in discussions as it relates to treatment of the Bareroot woman and her three children.

Lawrence said that her Ministry will ensure that all sectorial departments within her ministry are up and running and that they work with the other relevant agencies. She said that communities need to come on broad because social issues happen in communities.

Lawrence reported that the woman and her children who are now patients at the Georgetown Public Hospital Corporation (GPHC), do not appear unkempt.  “They don’t seem to be suffering from malnutrition or anything but something snapped in her mind.” Lawrence opined.

Attempting suicide is a criminal offence under the Laws of Guyana and according to Lawrence, the woman would have to face the law but counseling will first be administered as soon as the woman recovers. “That woman’s frame of mind, she not the same as yours or mine and therefore she needs all the love and support she can get,” Lawrence said.

The minister said that she believes the health sector needs to place special emphasis on mental health. She noted that the Ministry has to ensure that it works with the Guyana Police Force so that they can recongise and call in the relevant personnel with the technical skills and knowledge to address mental health issues.

The Minister said that the Child Care Protection Agency will step in to look into the children’s welfare. The children’s next of kin are their grandparents.