Minister of Social Protection to give assistance to fire victims.

On the 16th February 2017, Ministerial Advisor – Ms. Alicia Reece and Investigating Officer within the Ministry of Social Protection Ms. Daniella David on behalf of the Minister of Social Protection Hon. Amna Ally, MP; visited two neighboring families at 32 Princess Street Werk-En-Rust. The families were victims of a fire that destroyed their properties at approximately 18:30hrs on the 15th February 2017.

The officers interviewed the members of both households and offered the Ministry’s compassion in this difficult and most unfortunate circumstance. The families were promised financial aid, food vouchers and any other assistance that can be afforded them.

Mr. Clifton Mosley is the owner of the structure that occupied the western lot of the compound. Mr. Mosley’s building has three apartments.  He lived with his reputed wife in a section of the building while his granddaughter and her husband along with three children occupied another apartment; his grandson occupied the final apartment.

In an interview, Mr. Mosley’s wife Gloria, who lives on the western lot – said that they neither have electricity nor water and would use a lamp and would get their supply of water from a few yards away.  Ms. Gloria said that it was while filling water on the day in question, she left the lamp lit and upon her return she saw that her house was engulfed by fire. The eastern wall fell onto Ms. Morris’s home completely destroying the top flat. The bottom flat was saved but some articles were destroyed as fire fighters battled the blaze. 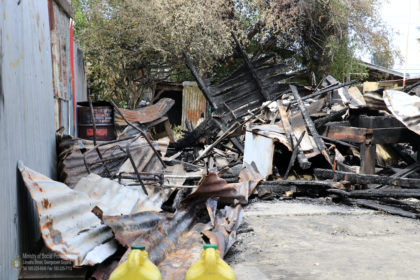 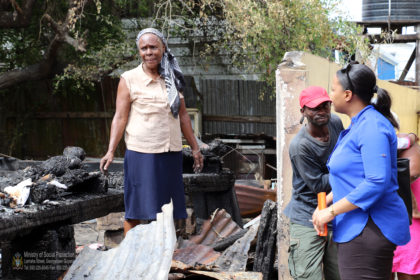 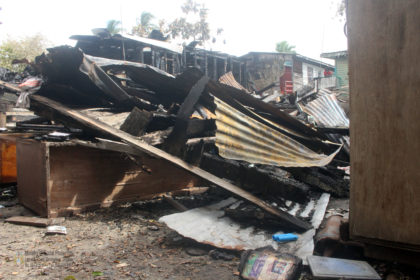 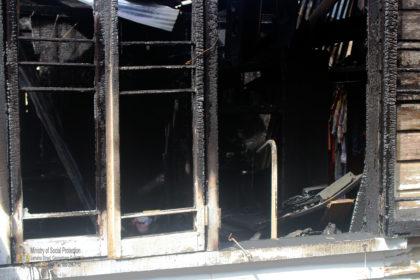