The Ministry of Finance will be strengthening its valuation division in order to help the Local Democratic Organs (LDOs) improve the state of their finances.

According to Minister of Communities, Ronald Bulkan, the technical assistance agreement recently signed by Minister of Finance, Winston Jordan and the Inter-American Development Bank (IDB) Country Representative, Sophie Makonnen, provides funds for the Ministry of Finance to modernise its valuation department so it can provide the  service. 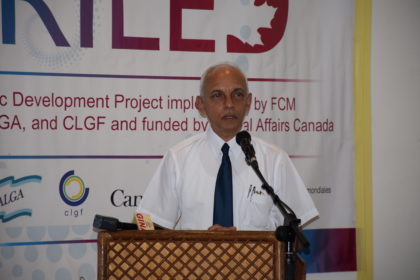 Addressing Mayors at the recent two-day local government forum held at the Hermanston Lodge, Minister Bulkan noted that the national valuation system is one mechanism that has been allowed to fall into disrepair as a result of the extended neglect of the local government system.

He observed that there was a lack of appreciation for the role of the system and “therefore little or no regard was placed on the need for councils to have a sustainable revenue base to allow for their effectiveness and independence.”

The minister said that the new administration recognises the importance of restoring the effectiveness of the valuation department to provide meaningful support to the councils, as well as to modernise the regime for property evaluation.

The minister said that a modern property assessment scheme is essential since it would allow for a system whereby a significant portion of the revenues to fund the work of the LDOs will be internally generated. It will also ensure that the councils do not have to rely on subventions from central government as their  principal  source of revenue, the minister said.

Many local democratic councils have complained that their revenue base is insufficient to finance the effective management and administration of their respective districts.

Revenue for the councils comes from rates applied to properties that were valued under a regime system which dates back to the 1970’s.

When applied today, the monies collected from these efforts are insufficient to allow the LDOs to effectively deliver the level of services that are required in communities.

It has been noted that LDOs are heavily dependent on financial support from central government and this could be used to compromise their independence.

In reforming the local government system, the government prioritised overhauling and modernising the national valuation system to help improve the finances of the LDOs.

The technical agreement signed between the Finance Ministry and IDB provides US$745,000 to fund a Fiscal Management Modernisation Project.

According to a press release sent out by the Ministry of Finance following the signing on March 6, 2017, the “Fiscal Management Modernization Project” is designed to create greater efficiency in Guyana’s revenue administration.

The release stated that the project will envelop a strategic organisational structure and strengthen institutional and technical capacities of human and other resources of the Guyana Revenue Authority (GRA).

It also undertakes an assessment of the property tax collection system administrated by the Valuation Division of the Ministry of Finance.

This assessment will see more realistic valuations of properties in Municipalities and Neighborhood Democratic Councils (NDCs) which in turn will lead to an increase in the value of real estate, the release said.