The Ministry of Indigenous Peoples’ Affairs (MOIPA) has donated a sewing machine to the Moblissa Women’s Group, to help create opportunities for them, their families and community.

The group’s members received the machine, along with several yards of cloth, thread, needles and other sewing accessories from Minister of Indigenous Peoples’ Affairs, Sydney Allicock, during a small ceremony on Saturday at Moblissa, located on the Linden/Soesdyke Highway. 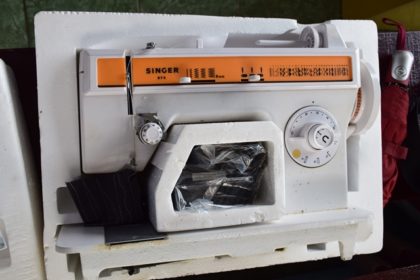 Minister Allicock explained that the donation was in response to a number of requests made by the women’s group during a visit to the community, two months prior, by a team from the Ministry.

“I would like to hand this over to you as a beginning to your greater  dreams…we are looking for the opportunities that will allow you to become professionals, in whatever you are doing, and since you have shown that interest, the ministry and government would support you,” the Minister told the women.

The Minister explained that the Ministry sought to quickly respond to a number of these requests, as they were in keeping with their effort to push economic growth in indigenous and remote communities.

Addressing the needs of the group is also in line with the Ministry’s agenda of empowering women, for leadership and to play a part in their community and by extension the country’s development.

“We are beginning today, with a small contribution to your dreams and your wishes and we look forward to continuous growth. I would love to one day come here to order my clothing,” he added.

Group member, Carmelita Rutherford told the Government Information Agency (GINA) that the donation is a boost for the group to kick -start several initiatives that it had conceptualised towards addressing the needs of its members, and that of the community.

“In Moblissa, we do not have people with jobs, so if we (the women’s group) can help by sewing a few school skirts and so on, and selling them at a lower price than what is offered in Linden, it will be a great relief to the parents in Moblissa,” Rutherford explained.

The group is also seeking to use the materials supplied by the Ministry to manufacture items such cot sheets, throw pillows and embroidered pieces that they will seek to sell in Linden during the Christmas holidays.

Rutherford noted that the group has agreed to use the money garnered from this exercise to fund the supply of food hampers to the seniors, and the less fortunate members of the community during the Christmas holidays.

Member of the Moblissa Women’s Group, Carmelita Rutherford examines the sewing machine that was handed over to group by the Ministry of Indigenous Peoples’ Affairs