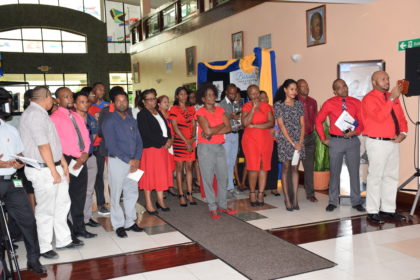 Dr. Moore said that NAPS has been more focused on prevention of the disease in 2016.

“Thus far for 2016, most of our activities would have been concentrated on working among the key population at higher risk so we have a prevention of HIV service package where testing and counselling is offered, capacity building, peer education training, condom distribution…and this is done specifically targeting our key population … miners and loggers,” Dr. Moore said.

Dr. Moore noted that the Secretariat is still involved in its community mobilisation efforts to bring about awareness among both in and out of school youths since the youngest infected person moved from age 24 to 15.

These statistics have caused intensified efforts being put forward by NAPS. “We have been doing pretty well in terms of reaching the key population at higher risk. We have already been able to reach 6000 MSM, female sex workers more than 7000 miners and loggers, and this is just for the first half of the year, so the other works that we are doing in terms of our response includes prevention of mother to child transmission, and through this, we are improving our testing of mothers to ensure that mothers in all the regions are tested during pregnancy,” the programme director stated.

Dr. Moore said that much is being done, and it is not an impossible job, however more commitment is needed from stakeholders. Dr. Moore also expressed gratitude towards PANCAP for their donation to the National Food Bank. She highlighted that the food bank has given over 2,200 food hampers to persons living with HIV.

“We have patients who would have stood to give testimony to how much supply that the food bank would have offered towards the rehabilitation process in changing their lives,” the program director noted.

Deputy Secretary General (CARICOM) Dr. Manorma Soeknandan, said that in Guyana, much support is needed to eliminate this disease by 2030 which is the UNAIDS’ goal.

The Deputy Secretary General said that member states are very much committed towards providing care, treatment and support for persons infected with HIV however; she noted that prevention is important.

“All of us know that member states are constantly struggling when it comes to budget. Where do we put the money? Is it health? Is it education? Is it agriculture? Is it sports? Where does it go? … people will always complain and sectors always feel discriminated so it is really a struggle and again if we can help each other and we can help our government minimising that struggle then we have to do it,” the Deputy Secretary General pointed out.

Meanwhile, PANCAP’s Director Dereck Springer has assured their continued commitment to the elimination of AIDS by 2030. Springer said that PANCAP decided to refocus their efforts on prevention in the HIV fight. “Every one of us has the opportunity to do our own introspection, to determine what makes us vulnerable towards HIV, and if we recognise the vulnerability and risks in our lives to take steps in addressing it,” Springer urged.

The PANCAP Director said that CARICOM is poised to become the first region in the world to be able to Prevention of Mother to Child Transmission of HIV (PMTCT) as it was done in Cuba.

The PANCAP director highlighted that 52 percent of the people who are infected with HIV are receiving antiretroviral treatment.

World AIDS day 2016 is celebrated under the theme HANDS UP FOR #HIVPREVENTION. This day is celebrated each year and is an opportunity for people worldwide to unite in the fight against HIV, to show their support for people living with HIV and to commemorate people who have died. World AIDS Day was the first ever global health day, held for the first time in 1988.

According to the UNAIDS website, globally there is an estimated 34 million people who are infected with HIV.  Despite the virus only being identified in 1984, more than 35 million people have died of HIV or AIDS, making it one of the most destructive pandemics in history.

Today, scientific advances have been made in HIV treatment, there are laws to protect people living with HIV and persons have understood more about the condition. Despite this, each year people are diagnosed with HIV because they do not know the facts about how to protect themselves and others. Stigma and discrimination remain a reality for many people living with the condition.

World AIDS Day is important because it reminds the public and Government that HIV has not gone away, there is still a vital need to raise money, increase awareness, fight prejudice and improve education.