The Community Advocates Programme (CAP) is the first of its kind to be rolled out in Region Nine. The Ministry of Social Protection (MOSP)is educating and empowering Region Nine community and village leaders to address social issues through their various levels of influence.

The leaders will collaborate with the various departments within the ministry even as they are about to establish a social protection office in the region shortly. The ministry has recognised that training community leaders is the most effective way of tackling social issues such as abuse, while providing services for probation and family welfare, Counter Trafficking in Persons (CTIP), Gender Affairs among others.

Wentworth Tanner, Director of Social Services, MoSP disclosed that the programme is the first of its kind. “We have done individual programmes where persons were going to learn about child abuse or persons were going to be trained on domestic violence… but this is a programme where we pooled all our resources and brought together all the technical persons from the ministry.”

On conclusion of the workshop, participants will be certified by the Social Protection Ministry as community advocates. The workshop is slated as a ‘national programme’ which will eventually be rolled out in all regions and sub regions throughout Guyana.

The CAP is intended to achieve a network of advocates countrywide, which will strengthen communities’ response to social issues, empower and equip communities with the acquisition of knowledge and coping skills and improve the quality of vulnerable groups (including women and children) by providing access to social support and other community resources.

Tanner said that there are numerous misconceptions when it comes to issues which need to be addressed by the ministry. 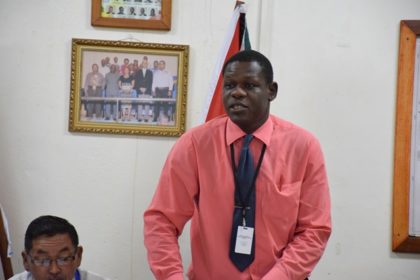 “We recognise that given the shortage of Probation and Social Services officers and given the magnitude of these issues we would not be able to adequately address them even if he had ten more officers in the region.”

Deputy Regional Executive Officer (DREO) of Region Nine, Sherwyn Wellington, added there has always been need for Social Protection officers throughout the region. “with the absence of such critical officers in the region, there is greater call for the community advocates programme in the region.

Even as the community advocates will serve as substitutes within their communities, the DREO urged each participant in the workshop to exercise professionalism after receiving certification.

Participants noted that the ministry should consider hosting similar workshops for more parents and teachers. More specifically, by equipping teachers, social issues relating to children attending schools can also be addressed. Additionally, participants recommended that parents also be educated to deal with domestic issues so they can cope with issues, should the need arise.

Participant Troy Benjamin, a teacher attached to the St. Ignatius Secondary School said that he will be better equipped to help persons affected by social issues.

In his birth village, Yakarinta, Benjamin said that teenaged pregnancy continues to be a social issue that is not addressed. After benefitting from this training, he feels empowered to return to the village and host mini workshops for the youths.

“I think I can go there to have mini workshops, especially with the young people in there to help them understand some of the negative impacts and consequences of the decisions they make.” The teacher explained.

Participants in attendance at the Community Advocates Programme.