Healthcare professionals, friends, family and Rotarians from the Rotary Club of New Amsterdam took to the streets on Sunday morning to participate in a walk aimed at raising public awareness of Polio.

The walk commenced at 7: 00 am at Palmyra and culminated at Number Two Village, East Canje. Several participants held aloft banners with slogans calling for the elimination of Polio. 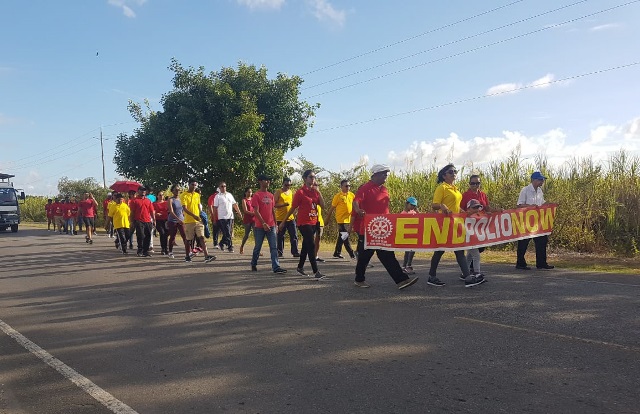 Participants during the walk. 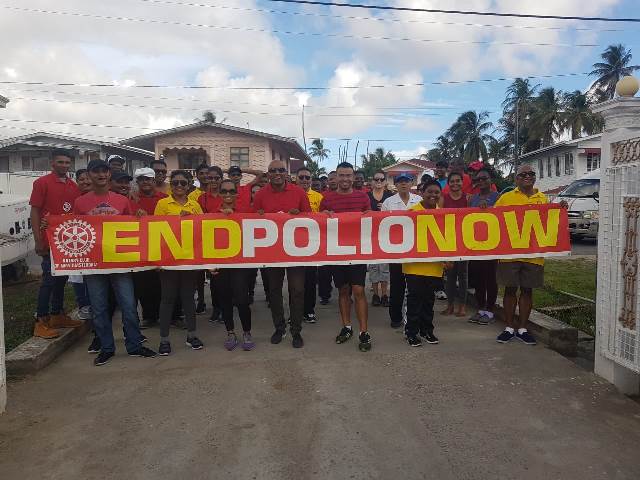 Rotarians of the New Amsterdam Rotary Club at the conclusion of the Polio awareness walk held on Sunday morning in Berbice.

According to the World Health Organization Polio is a highly infectious viral disease which mainly affects young children. The virus is transmitted by person-to-person transmission, mainly through the faecal-oral route or, less frequently, by a common vehicle and multiplies in the intestine, from where it can invade the nervous system and can cause paralysis. There is no cure for Polio, it can only be prevented by immunization.

President of the New Amsterdam Rotary Club Rafeek Kassim said they will continue to raise awareness and fight against Polio until the disease it is eradicated worldwide.

Kassim explained over the years the Rotary has always employed sensitisation as a tool to fight against the disease and while they have made tremendous strides and have been able to sustain it, the main goal will be achieved only when polio is completely eliminated.

He also spoke of the importance of vaccination and practising proper hygiene habits and urged parents to ensure their children receive their Oral Polio Vaccine.

The WHO has reported the OPV vaccine has helped in the elimination of polio and has reduced the number of cases reported each year from an estimated 350,000 in 1988 to 22 in 2017. More than 16 million people have been saved from paralysis because of vaccination efforts against polio.