New Heads of Mission urged to be strategic thinkers

The Ministry of Foreign Affairs is currently examining plans for its restructuring to ensure it functions more efficiently. The re-organisation of the Ministry is part of efforts to address “in house deficiencies” and is also aimed at improving support to Embassies and Missions abroad.

Foreign Affairs Minister Carl Greenidge said that a parallel focus of the restructuring will be enhanced recruitment of skilled staff and more reliance on technology to improve response time for requests from overseas Heads of Missions.

“You can’t manage trade relations with three or four officers who have really come to run a system where in the past you had an entire Ministry concerned with Foreign Trade, and trade relations,” Greenidge said. 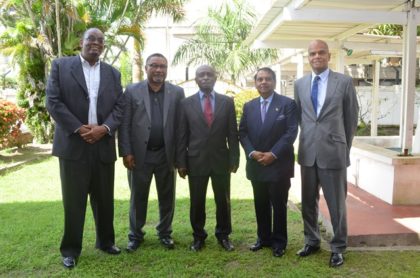 The Minister was speaking at the opening of a one-week orientation of newly appointed Heads of Missions at the Foreign Service Institute, Shiv Chanderpaul drive.

“The reality is that the training that is required to make Embassies abroad efficient is not only required to be directed at the new Heads of Mission, but we also have to do something about deficiencies in house, right here in Georgetown,” Minister Greenidge explained.

The Minister noted the importance of additional skills outside the area of international relations. The Foreign Affairs Minister challenged the Heads of Missions to be strategic thinkers, analyse their issues and use technology to efficiently address concerns or issues that they will face during their tenure.

The ministry is working with past ambassadors, some as advisors to the minister in the areas of ‘policy formulation and the like’, “And therefore, that institutional mechanism I hope is going to help, to see us smoothly through the re-establishment of what clearly is widely acknowledged as one of the most effective if not outstanding Foreign Services certainly in the Western Hemisphere,” Greenidge said in reference particularly to the Foreign Affairs Institute.

Six Heads of Missions are undergoing the one-week orientation at the Foreign Service Institute following which they will be deployed to their various posts overseas. Among the Heads of Mission taking part are Permanent Representative to the United Nations, Michael Ten-Pow, Ambassador to Kuwait, Dr. Shamir Ally, High Commissioner to South Africa, Dr Kenrick Hunte and High Commissioner to India, Dr David Pollard.

The Foreign Affairs Minister noted the timeliness of the orientation since this will be the first time many of the appointees will be serving in the diplomatic corps. “We’ve therefore take the opportunity at this point in time to put on a mini programme…so as to expose them to a variety of requirements and identify for them a range of hazards that they may encounter in these new positions,” said Greenidge.