A new app to help Grade Six students improve their Mathematics (Maths) skills was launched at the National Racquet Centre on Woolford Avenue, today. The app which was developed by STEMGuyana was made possible through the full support of the Office of the First Lady of Guyana, and the Ministry of the Presidency. 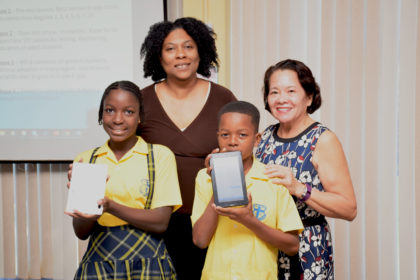 Frist Lady, Sandra Granger and Co-founder of STEMGuyana, Karen Abrams, with two Grade Six students displaying the app on their tablets. The students were among the 60 that tested the beta version of the app in phase one of the app roll-out.

In attendance at the launch were President David Granger, First Lady Sandra Granger and Co-founder of STEMGuyana, Karen Abrams.

The mobile Math app was created using a databank of 2010 to 2016 Grade Six examination papers. It works by allowing the students to design their own Math examination.

The students determine the number of questions, the year the examination questions are from and the paper type (Paper One or Paper Two).

Abrams said the development of the app was in response to the slide in Grade Six Maths in the country. She explained that it was created, in the recognition that the future of Guyana will depend on producing innovative minds, who are comfortable with Mathematics and Technology.

“Math is a foundational subject if you do not get it at 10, you are going to struggle at 11 and it goes further downhill… we cannot allow that to happen…we really have to nurture the talent that we would need to develop Guyana,” Abrams said. “…if our children are to be prepared to take advantage of the opportunities in the future in Guyana , they are going to have to start now  and not only must they do well in Math, but they must believe, and they must be confident that they are Math superstars,” she added.

The app was developed by Abrams’ children, who created the databank of 2010 to 2016 old Grade Six examination papers and utilised two local teachers and Math PHD from Siberia to ensure the credibility of the answers.

The app includes explanation videos for every question, a section for school and teachers ranking and for students to commend outstanding 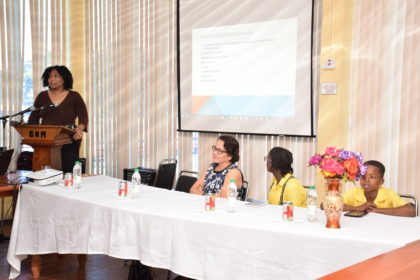 Co-founder of STEMGuyana, Karen Abrams, addressing the launch of the Grade 6 mobile Math app at the National Racquet Centre on Woolford Avenue, Georgetown

teachers. It also allows an exchange market place for books and school-related items, and a school calendar space where administrators and teachers alike can post about educational events.

The second phase of the app roll- out which began from today will be an open test of the app that goes for 14 months, Abrams explained.

During this period, STEM Guyana, will seek to raise funds to purchase 100 tablets which it would distribute to selected beneficiaries in historically, schools with low Math performance. STEMGuyana will monitor and evaluate the students’ use of the app to determine the app’s success, Abrams explained.

In Phase Three, the organisation will pursue national adoption of the app in all regions.

Abrams explained that through a public -private partnership, the organisation will seek to fund Wi-Fi in schools, and tablet distribution, to enable the national-rollout of the project.

During this phase, as well, the organisation would also seek to add and roll- out more Grade Six STEM subjects’ apps such as science, social studies and English.

Subsequent to the success of the third phase, in the fourth and final phase, following the evaluation STEMGuyana will move towards taking the app to the Caribbean regions, Abrams said.

STEMGuyana is a 50- membership Diaspora group, which partners with local stakeholders to prepare young people to use their creativity, brilliance, and innovative spirits to create technology solutions for problems in their community.

Financed by a $2Million contribution from its membership, during the summer of 2016, STEMGuyana hosted more than 200 students in four robotic building and programming camps held in Georgetown, Buxton and Lusignan.

On average about 14,000 children sit the National Grade Six Assessment at the end of April each year, with less than 50 percent attain passing grades.