–  “We will continue to encourage genuinely free and fair elections”

The newly appointed Ambassador credited the government for making significant progress in its democratic process and political institutions. “We have seen a strengthening of the democratic process and political institutions, along with broader political participation and citizens representation. Moving forward, we will continue to encourage genuinely free and fair elections, freedom of speech and assembly, multiparty representation and a constitutional judiciary process” she underscored.

The call by the ambassador for ‘free and fair elections’, signals the US’ support for the Coalition Government’s stance on the current political situation. That is the fact that the Guyana Election Commission (GECOM) must advise the president on the commission’s state of readiness before an election date can be announced, and the government’s right to challenge the motion brought against them last December. 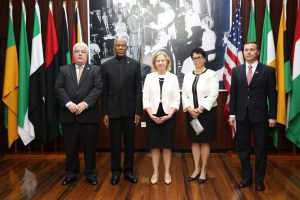 Ambassador Lynch said that she looks forward to building on and improving the works of her predecessors to deepening the relationship between the two countries. The newly accredited ambassador noted that Guyana is embarking upon a time of significant transition and growth and is poised to become a regional leader. The US, she said, is committed to helping Guyana realise its full potential.

The two countries share a relationship spanning more than five decades which has cemented cooperation in the fields of commerce, defence, the economy, energy, public health, public security and youth empowerment.

In this regard, President Granger stated that the relationship between the two countries “is founded on mutual respect for each other’s territorial integrity and sovereignty, mutual non- interference in each other’s internal affairs, cooperation for mutual benefit, respect for treaties and international law and the maintenance of regional peace and security.”

President Granger said that Guyana is committed to maintaining the Caribbean and South America as a zone of peace.

“Guyana has been resolved to defend its territory, dismantle transnational criminal networks and develop its natural resources for the benefit of its people… The capabilities of criminal cartels could exceed those small states such as Guyana. We must seek support through partnerships with other states which have an interest in preserving the Caribbean and the South American continent as a zone of peace. Guyana looks forward to the support of friendly states in its legitimate request to protect itself against threats to its people, its economy and its territorial integrity and sovereignty.”

The Head of State added that the preservation of regional peace and stability is vital to the two nations protecting its common interest in providing a safe and secure environment for investors. President Granger assured the newly accredited ambassador of government’s support in the execution of her duties.