Operation Safeway bears ‘some fruit’ one year on -Traffic Chief

Almost one year since Operation Safeway was launched the traffic department of the Guyana Police Force (GPF) has managed to reduce the number road fatalities.

On September 15, 2016, the Traffic Chief launched Operation Safeway with the intention of decreasing accidents and deaths on the roads and promoting better road safety awareness. 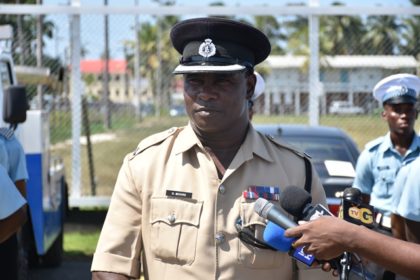 On Friday, Traffic Chief Dion Moore said that Safeway “has borne us some amount of fruit”. That fruit is a reduction in the number of fatal accidents this year compared to the same period last year.

From January to September 2017, the GPF has recorded 65 accidents with 72 deaths. Speeding and driving under the influence of alcohol remain the leading cause of accidents on the roadways the Traffic Chief pointed out.

“It is not pleasing but it’s a great achievement and we are looking forward to the continued support from members of the public to further reduce accidents and deaths by the end of this year,” Moore said.

The year 2016 was one of the deadliest for road users with 116 fatal accidents resulting in 127 deaths by the end of that year.