The job of teaching is round-the-clock, challenging, often frustrating, a huge responsibility — but also rewarding.  Today, October 5, as we honour these soldiers of the blackboard jungle, the Department of Public Information (DPI) sat down with Allison Cosbert, a stalwart in the profession.

Currently, the Headmistress of North Ruimveldt Multilateral Secondary School (NRMSS),  Cosbert entered the teaching profession in the late 80s. She always pictured herself working at a corporate business, however, after being bitten by the ‘teaching bug’, she decided against it. 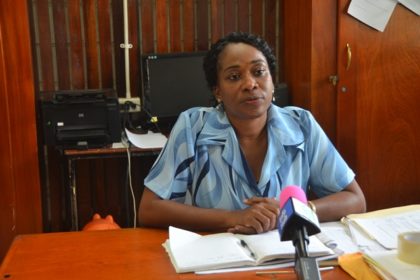 She began her teaching career at the nursery school level. This provided her with the opportunity to attain patience and understanding through interaction with the students. It was not long after she came to the realisation that this was her calling.

“I joined North Ruimveldt Multilateral Secondary School (NRMSS) staff after being trained as a nursery teacher and also after having completed a degree in Economics at the University of Guyana. I came to NRMSS as a graduate mistress and I had the honour to teach at this school for more than 30 years until 2013 when I left and went to Charlestown Secondary School as a Deputy Headteacher,” Cosbert recalled.

Despite having some remorse about the decision to leave the school that had brought much joy in her life; she felt the appointment at Charlestown Secondary School was also an opportunity to step out of her comfort zone while continuing to assist in moulding the minds of the nation’s future leaders.

According to the Headteacher, her four-year stint at Charlestown Secondary School allowed her to mature in her profession, especially since she was interacting with children from different backgrounds.

“During my journey in the teaching profession, I have learnt quite a lot especially how to deal with children, teachers also, and even been able to give advice others.”

She was overjoyed when NRMSS was awarded A-list status, as this has been the ultimate goal of many of the headteachers who had served before her. To accomplish this rank means the students are receiving a proper delivery of public education.

Cosbert noted that though she took the appointment at Charlestown Secondary after NRMSS was given an A-list status, she saw evidence of her hard work in the students’ performance and attitude towards schoolwork.

On rejoining the workforce of NRMSS, Cosbert reflected “I am no stranger to most of the teachers I left in 2013. They are still the working group that cooperate and give me all the support as they work up as a team”.

The Headteacher expressed satisfaction that many of her students have themselves become teachers and has advised that they exercise patience, learn to be supportive and most importantly, learn to be team players. She is also encouraging others to join the teaching workforce, not for the money but, for the love of the profession and students they will meet along the way.

Allison Cosbert noted that there have been obstacles along the way in her career path, however, it was her persistence that pushed her to overcome those obstacles and helped her to become the person she is today, a teacher and advisor.