Posts discarded and covered with weeds alongside the road in Paradise Housing Scheme, East Coast Demerara

Minister within the Ministry of Communities, Valerie Adams-Patterson told residents of the Paradise Housing Scheme, “If you have a CDC you now have structure, you have clout, because you are now an organised group and the CDC is registered. You now have authority to speak on behalf of the people.”

Minister Adams-Patterson who is tasked with oversight for all CDCs said that she would provide the technical support to the residents to establish such a council.

The minister met with residents in the East Coast Demerara housing scheme on Friday, to hear their concerns. Poor roads, lack of street lights and erosion from the drainage and irrigation pump were the main issues raised by residents.

Minister Adams-Patterson told the residents that, “all the schemes have issues” but assured that her ministry has been working assiduously to address these matters. 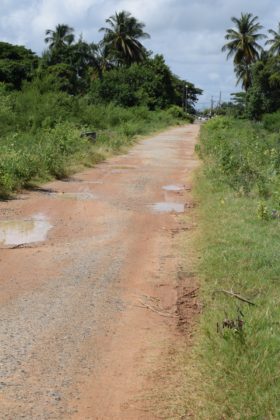 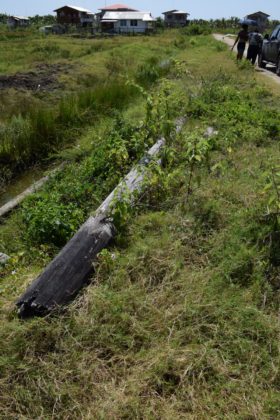 Posts discarded and covered with weeds alongside the road in Paradise Housing Scheme, East Coast Demerara

“I’m not promising you you’re going to get the road for Christmas or next year, but we can get some remedial work done to bring relief,” the Minister told the small number of residents she met with.

The Paradise Housing Scheme was established six years ago. Approximately 50 lots were distributed but most remain unoccupied.

Nicole Moe, who has been living in the scheme for three years, told the Government Information Agency (GINA) that only about 10 persons actually live there.

Moe told the minister that lack of lights and poor roads pose a security risk to residents. “When you got to come home from work like 11 and 12 o’clock you have to walk down this road, you alone, because nobody wants to come down this road and now they start robbing people when they start coming in that hour,” Moe said.

Junior Brown said he built his house, but does not live in it because of the lack of electricity.

Government has been working to improve conditions in all housing schemes. In July, several housing schemes across five regions benefited from the installation of electricity distribution networks. Government spent over $500M on the power supply intervention.