Minister of Agriculture, Noel Holder said there must be sound management of pesticides and toxic chemicals in order to reduce the risk to human health, the environment and food safety in agriculture production. 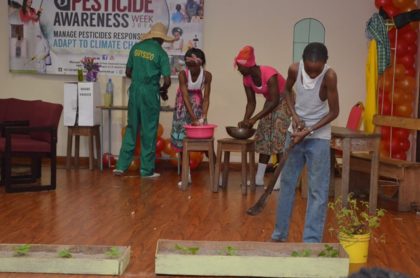 The minister was delivering the feature address at the Pesticides and Toxic Chemicals Control Board’s (PTCCB’s), School Dramatic Competition Finals, held at the Ramada Princess, Georgetown,

The minister said that while pesticides are generally used to prevent and control pests and diseases, the most vulnerable people are those on the frontlines of pesticide exposure including, rural communities, farmers and children.

The minister called for increased awareness of the proper management and 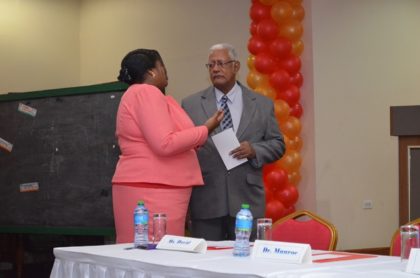 Minister of Agriculture, Noel Holder and Registrar of the PTCCB, Tricia Garnath in discussion at the PTCCB drama competition finals at the Ramada Princess

handling of pesticides and other toxic chemicals.

“Unfortunately, children still constitute a significant part of the rural labor force in many contexts,” the minister added.

Holder pointed out that the general population is exposed to pesticides mainly through eating food and drinking water contaminated with pesticide residues, the use of repellants and other toxic chemicals around the home.

“The most visible example of children being exposed, are those working in the fields spraying chemicals or where chemicals were sprayed. But, there are other hazardous situations, for example, when children wash their parents’ contaminated working clothes or protective gear or, when pesticides are poorly stored at home or, when parents send children to purchase pesticides. Most children suffer from environmental exposure to pesticides by working, living nearby or passing through sprayed fields,” Holder told those gathered at the awards ceremony.