A team of technical experts have started mapping out the area identified for the construction of a new 12-mile, four-lane highway on the West Bank Demerara (WBD). 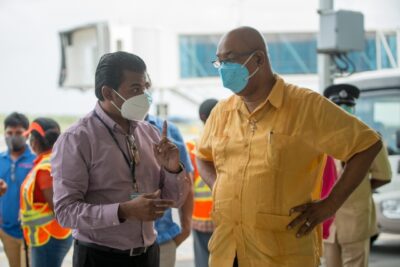 “At the appropriate time, we will be making an announcement about designs and all the rest of it. What I can say though, is that it’s an inter-agency technical working group that is being led by the Ministry of Public Works and work is advancing,” Minister Edghill told DPI.

The new highway will link the proposed site for the new Demerara Harbour Bridge on the WBD and Parika on the East Bank Essequibo.

President Dr. Mohamed Irfaan Ali has said the Government would be utilising the services of local experts, as it prepares for the construction of a four-lane high-way at WBD.

While the Sheriff to Mandela Road Expansion Project has been accelerating, Minister Edghill said ingress and egress of businesses and residents must be maintained, especially during the Christmas season.

“We are monitoring to ensure that there is compliance because we must get the road done quickly in an efficient manner, ensuring we have value for our money and it must be engineering and structurally sound.”

He said engagement between the Ministry, the contractor and consultants are ongoing to ensure a speedy resolution to all matters that could hamper the project. Works are 57 per cent complete, while the entire project has a deadline of August 2021.

Minister Edghill said the Government expects China Harbour Engineering to stick to the terms of the US$150 million contract for the expansion of the Cheddi Jagan International Airport (CJIA). He reminded CEO of CJIA, Mr. Ramesh Ghir, the project contractor and engineer of the Government’s position during a meeting on December 9.

“We are taking serious action of which we will not make public at this time, but the contractor is aware of the action Government is taking, and will continue to take, and we demand specific performance of the contract.”

He pointed out that the project was mismanaged under the previous Government.

“We ended up paying more. Let me explain to you. We spent $346 million beyond the US$150 million to buy two air bridges; we spent money to fix the ramps and do repairs so that the airport could be operational because of failure on the part of the contractors. So, we are way past that amount of money and we don’t have a complete airport. And, the only way China Harbour could have done what they did is because the previous administration, as incompetent and reckless as they were, facilitated that kind of vulgarity.”

The Minister said the contractors on the project are the same ones who worked under the Coalition Government, and there have been far better results since the PPP/C took office.