“Unprecedented” and “contempt in the face of the Parliament” were the words used by Prime Minister Moses Nagamootoo to describe the actions of the opposition that forced the Speaker of the National Assembly to leave the Chambers. 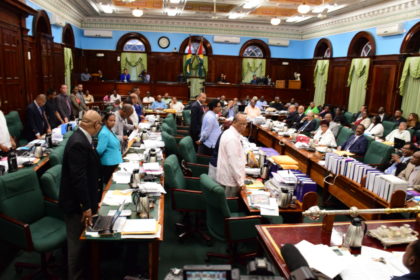 The Prime Minister said that the claim made by MP Dharamlall was “a very serious charge” that is “not consistent with the motion.” PM Nagamootoo equated the Speaker and his presidency over the House to that of a courtroom. He said the opposition’s actions were “very disrespectful and disorderly behaviour”. He added that these actions were “unparliamentary and uncalled for”.

The Prime Minister was referring to, when the Speaker invited the next presenter to proceed, the entire Opposition side stood up in objection to the Speaker’s action against Dharamlall. Opposititon Chief Whip Gail Tiexeira, complained about the Speaker’s leniency towards the government side of the House.   Tiexeira particularly singled out Minister Trotman’s redress of Leader of the Opposition during last night’s sitting of the National Assembly calling the Minister’s reproach “abuse”’.

The Opposition Chief Whip continued to complain ignoring the Speaker’s call for the opposition side of the House to take their seats so the debates can continue. The Speaker then walked out of the Chambers in disgust. 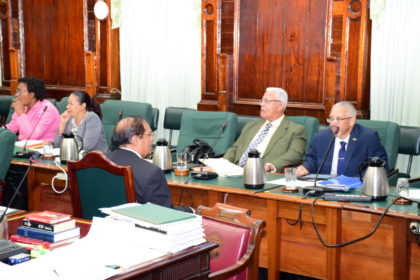 During the 15 minutes that the Speaker was absent from the Chambers MP Dharamlall continued his presentation while Prime Minister Moses Nagamootoo was pressed by the media for a reaction on the corridors of the Public Buildings.

The Prime Minister charged that the opposition is introducing “political bullying into the House.” “This is one of tactics of the Jagdeo opposition to create disruptions and to stir unrest in the country…and to threaten that there will be protests and there will be objections to various aspects of national life,” PM Nagamootoo said.

Meanwhile, the Prime Minister dismissed claims that the Speaker of the House is biased or lenient to the government side of the House.

“The Speaker of the House is an impartial person there to preside over proceedings and he defends the integrity of the House,” PM Nagamootoo said. The opposition has to bring forward a case against such an allegation the Prime Minister contended.