The Peoples Progressive Party/ Civic, (PPP/C’s), second elections rally got off to a bit of a late start, however, following the arrival of Prime Ministerial Candidate, former Army Chief-of-Staff, retired Brigadier Mark Phillips, Presidential Candidate, Mohamed Irfaan Ali and his wife and finally Party General Secretary, Bharrat Jagdeo, things got underway and went quickly into the usual political rhetoric, which has become the norm with elections campaigning.

The first speaker was a regional candidate, Nurse Doreen Alpine.  Bringing greetings from Orealla/Sipurita, the regional health worker claimed that in the last four years her community has experienced hardships. 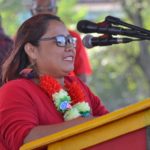 However, a quick check indicates otherwise. For example, history was made when Radio Orealla 95.1 FM went on air on March 24, 2018. The new radio station benefits the residents of the riverine community through the provision and the stimulation of ideas for community development through the communication link to the wider world.

The village of Orealla officially went online in April last year following the commissioning of six internet hotspots across the community. Minister of Public Telecommunications, Catherine Hughes, who spoke at the commission, had stated that these hubs would allow residents to have free, uninterrupted access to the internet while being in a public space.

Orealla has also seen a $132Million road project that bridges Orealla and Siparuta.  Under the project, the community’s internal roads received facelifts, as well as the construction of a public restroom.

Just in December 2019, an $11Million Stelling was commissioned in the community.  At that ceremony Toshao Carl Peneux had remarked, “Small and large boats can now moor and so we can get our lumber, we can get our farm produce… whatever they [the residents of Orealla] bring from the coast can be [offloaded] quite easily here.”

There was also a $1.5Million presidential grant towards the building of the village’s first guest house.

Also, for the first time in history, via the Telemedicine initiative under the present administration, doctors and healthcare providers at the Orealla Health Centre are now able to have direct video communication with Central Hospitals such as the New Amsterdam Regional Hospital and various other hinterland health centres.

Later in 2019, a $22.5Million river ambulance was provided for the community to improved healthcare delivery in both Orealla and Siparuta. With this, there is also a regular supply of fuel for the villages’ generator.

Back in 2017, Orealla also received a new ATV (All-Terrain Vehicle) from the Ministry of Indigenous Peoples’ Affairs. The vehicle is being used to support the community’s logging project.

Following Nurse Alpine, a slew of other speakers took to the microphone before the man of the hour, Presidential Candidate, Irfaan Ali.