Presidential Candidate of the People’s Progressive Party Civic, (PPP/C), Irfaan Ali, focused on his plans, as he spoke at a rally in Anna Regina on Saturday,

Among his proposals for the Essequibo Coast is, “Creating an enabling environment to make rice more profitable.”  He has hopes of creating a Rice Stabilization Fund to assist farmers.

Speaking of rice production, the Ministry of Agriculture reported that in 2019, Guyana produced more than one million tonnes of paddy, making it the second-highest production year for rice in the country. Industry experts also anticipate that production will increase in the coming years. 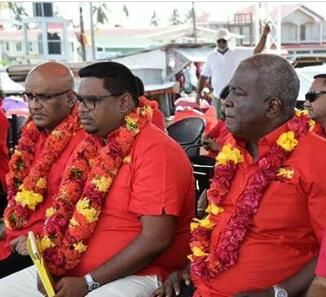 However, it must be noted, as of 2019, Guyana has been listed among the top 20 destinations in the world to visit, by Global travel magazine ‘Conde Nast Traveller’

The same year, Guyana was named; The world’s #1 in “Best of Ecotourism” and one of the Top Ten Sustainable Destinations at the ITB Berlin world leading travel and trade show.

Earlier national candidate Dr. Shavini Samlall spoke of not being properly compensated as a medical professional.

A quick check, however, reveals that since coming into office in 2015, the Coalition Government has been substantially increasing salaries for public servants. To date, the total increase in wages for public servants stands at approximately 64.2 percent. Increases for 2019 drove that figure up by another 11%.  Public servants also saw increases in their allowances.

The PPP/C’s next rally is in region ten.