Prince Harry of Wales arrived at the Eugene F. Correia airport, early this afternoon to a red carpet welcome.

His first engagement in the country saw him paying a courtesy call on President David Granger. Later, he laid a wreath at the National Independence Monument at Brickdam more commonly known as the Independence Arch. 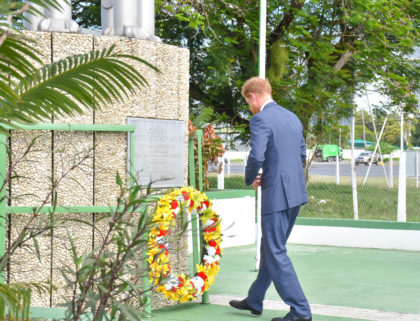 Prince Harry lays a wreath at the Independent Arch at Brickdam. The Independence Arch can be described as one of the nation’s most important national symbols. It was presented to Guyana, by the Demerara Bauxite Company (DEMBA) as an Independence gift, in 1966 to symbolise the end of an era, while ushering in a new phase of Guyana’s history. In May, 2016, newly sworn in President, David Granger initiated the restoration of the Independence Arch, which has now become an attractive feature on upper Brickdam, equipped with lights.

The Independence Arch, one of the nation’s most important national symbols was presented to Guyana, by the Demerara Bauxite Company (DEMBA) as an Independence gift, in 1966 to symbolise the end of the colonial era, while ushering in a new phase of Guyana’s history.

Prince Harry also visited Camp Ayanganna, the headquarters of the Guyana Defence Force, where he met with officer cadets, serving officers and veterans, and was also taken on a tour of the Base.

Then it was on to the Commonwealth War Graves, Georgetown, where he laid a wreath, in honour of those who lost their lives during the two World Wars and the pre-Independence period.

Later tonight, the Prince will attend a reception with the British High Commissioner.

On Saturday, His Royal Highness is scheduled to visit several tourist sites including the majestic Kaieteur Falls, the Iwokrama International Conservation Centre (IICC) and the Surama Lodge. Prince Harry will receive an official welcome from the Surama villagers, around the gathering point of the village’s Totem Pole. He will hear more about Indigenous village life, and take a short trip to the village’s eco lodge to see how the community is embracing eco-tourism.

A meeting with rangers is also scheduled for the Prince to learn about the conservation work carried out at the Iwokrama Reserve, and how steps are being taken to protect this important forest. Before arriving at the reserve, Prince Harry will also briefly stop at Fairview Village.

Prince Harry will embark on a short trek through the jungle to reach the Kaieteur Falls with local guides who will explain the local flora and fauna of the area. Kaieteur is the single largest free-fall waterfall in the world, with a drop of 741 feet, making it nearly five times as high as Niagara Falls in Canada.

On Sunday, the Prince will visit the Joshua Children’s House, and meet with First Lady, Sandra Granger before departing the country.

Prince Harry who is undertaking an official visit to the Caribbean on behalf of Her Majesty, Queen Elizabeth 11 is on the final leg of his journey. The Prince’s trip to Guyana rounds off  a two-week tour  (November 20 to December 04) that has seen him travelling  to Antigua and Barbuda, Grenada, St Kitts and Nevis, St Lucia, St Vincent and the Grenadines and Barbados. 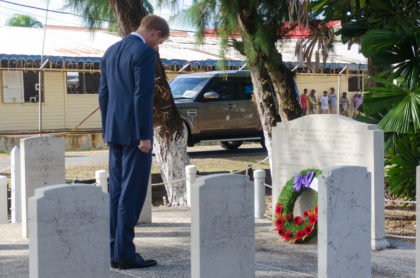 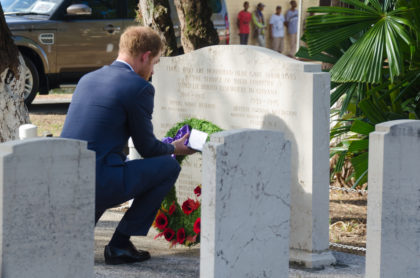