During a stakeholder engagement with Trinidadian Petroleum Specialist, Anthony Paul, Georgetown Chamber of Commerce and Industry President, (GCCI)Deodat Indar said the Private Sector would like to see better analysis on the local content policy framework. 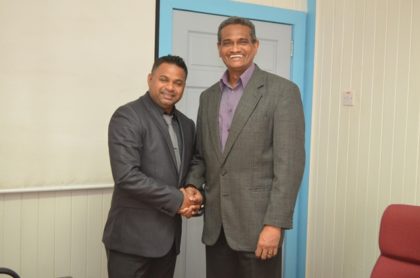 The GCCI president stated that as it relates to Guyana the situation and culture differs, hence the need for a proper long-term analysis of, “what we can ring-fence for the sake of our people”

Indar noted, “We do not want one year from now, Guyanese people are investing their money, setting up systems, becoming certified and they can’t get a chance at a contract.”

During the today’s engagement, Indar suggested some policy points he believes need to be addressed by the drafters. “The policy should address clear language, it should not just be in broad headings and people cannot read through it. It should flesh it out so people can see it clearly” he urged.

The GCCI president said he believes the oil industry will be one of the biggest drivers of the economy in the next decade, thus major oversight is needed.

“Such a large resource must have the broadest oversight possible to make sure that we get the best value from that resource we are popping out of the ground. And I think we understand on a macro level where this policy should be.”

Indar continued, “I think we are in agreement on most of it, but its working out the details to make sure our people do not get a disadvantage nowhere once we implement.”

Consultant, Anthony Paul explained that the local content policy is just a draft initially, “This is the first iteration of it. It

Some of the oil and gas company representatives at the local content policy engagement with Trinidadian Consultant, Anthony Paul.

wasn’t meant to be a perfect document. It is not. It will be improved as we go along.”

In terms of local participation in the oil and gas sector, Paul said “the policy will target Guyanese participation in things that are viable and sustainable. There is a whole host of possibilities, not everything Guyana will want to go after.”

However, he believes the oil and gas companies will be best suited to take the industry into the exploration phase, since they are already equipped with the necessary knowledge. He further explained that the government will have the upper hand and will lead in guiding those companies.

Paul opined that the afternoon session, which engaged several oil and gas companies was quite useful and productive, since the government and the oil companies are in agreement with the policy.  “I believe we are on the same page. When I say same page both the Government of Guyana and the oil companies in terms of the need for collaboration, he said.

The meeting resulted in the oil and gas companies giving full support of the local content policy draft and will in the future work to assist in the training of Guyanese personnel, who will benefit from job opportunities within the oil and gas sector.

The Ministry of Natural Resources is currently engaging stakeholders on the local content policy before it is finalised.