The predominantly district and regional hospitals will be upgraded and equipped to offload the significant number of referrals to the Georgetown Public Hospital Corporation (GPHC). The Minister of Public Health Volda Lawrence made this disclosure whilst delivering the feature address at the commissioning of GPHC’s newly expanded maternity unit.

The Minister pointed out that on a number of cases are being referred to the GPHC that can be treated at regional health institutions. 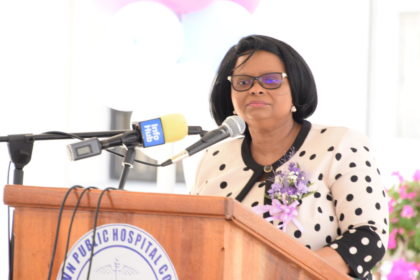 “I want to also assure you that, we are working to ensure that we upgrade our primary facilities in the various regions so that we do not have that high inflow of patients being referred to our tertiary health institution for services that can be had in the regions.” Minister Lawrence said.

The minister outlined a number of projects coming on-stream shortly to achieve this objective.  “As we speak the Charity Hospital (Region two) is presently undergoing some extension and rehabilitation and at the end of that process they will be able to house ten extra beds in the maternity section,” the Minister said

Further, she explained that the Suddie Regional Hospital, in Region two, has been identified as one of the three healthcare facilities which are expected to be upgraded through an agreement between the Government of Guyana and the Government of India. However, instead of an upgrade, the minister revealed that “Suddie will see a brand new hospital being built.”

Consultations were held between the Ministry of Public Health, the Region Four Democratic Council and the Neighbourhood Democratic Councils of Haslington/Grove and Diamond. This resulted in an agreement to have the CC Nicholson District Hospital and the Diamond Diagnostic Centre upgraded and recognised as regional health institutions.