The Guyana Civil Aviation Authority (GCAA) plans to develop charts for approaches to the Eugene F. Correia Airport at Ogle and the Cheddi Jagan International Airport, Timehri. This is to make landing and takeoff of planes much safer.

According to the Director of the GCAA, Egbert Field, works have begun and should  be completed by late 2017,

On the 29 November, 2016 at the Cheddi Jagan International Airport (CJIA), Timehri, an incoming Caribbean Airlines (CAL) passenger aircraft and a stationary Fly Jamaica Boeing 767 collided resulting in both planes being grounded. 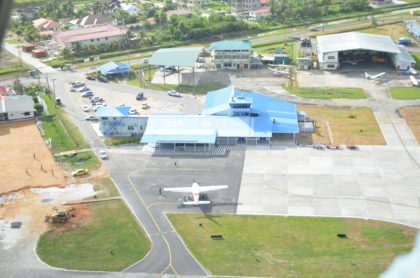 An aerial view of the Eugene F. Correia International Airport

The GCAA Director said that 2017 plans also include the completion of the Automatic Dependent Surveillance-Broadcast (ADS-B) project, more training of personnel, certification of the Air Navigation School, commencing construction of the new headquarters, acquisition of an air navigation state of the art simulator and the installation of distance measuring equipment at Ogle to help guide aircraft.

Meanwhile, upgrades are also planned for hinterland airstrips.  Aerodromes Inspector, Alphonso Mangah said that considerable repair and maintenance will be done to a number of airstrips including the Annai Airstrip to the tune of $3,922.000.

The overall improvements to the international and domestic airports could contribute to tourism development.

Director of the Guyana Tourism Authority (GTA), Indrnauth Haralsingh, in an interview with the Government Information Agency (GINA), said that international airlift and access is very critical to  boost tourism and leisure as well as for trade.

Haralsingh noted that Guyana would have seen an 11.6 percent increase of tourist’s arrivals as of September 2016. In the month of May when Guyana celebrated its 50th Independence Annivesary, the country saw a record 102 percent increase in arrivals when compared to the same period in 2015.

There was also an increase in domestic airlift among the three main carriers which are Air Services Limited, Roraima Group of Companies and Trans Guyana Airways. The GTA Director said that the expansion in domestic airlift for tourism purposes is due to more mobility, good roads, knowledge and awareness of the various tourism attractions and events which the GTA fully supported.

Haralsingh pointed out that there was one major setback to domestic flights which was the discontinuation of flights to Annai in Region Nine. This is costing visitors more to visit the North Rupununi area which is a key hot spot area for community based tourism, wildlife, indigenous based tourism, nature, fishing among others, Haralsingh said.

Haralsingh said that the GTA will continue to market Guyana as a sustainable tourism package that creates jobs and promotes local culture and products to boost the economy.