Sandvoort Villagers voted at LGE for the first time

– as Govt plans to establish a Neighborhood Democratic Council (NDC) in the Village.

– youths cast their votes with much expectation

– voters confident of having an improved village after elections

At the commencement of the Local Government Elections (LGE) at 06:00hrs today, residents of Sandvoort which is located in West Canje Berbice, Region Six, were seen at the Sandvoort Primary School, which is the lone polling station in the Village. What was even amazing was that the majority of young voters.

Villagers, while speaking with the Department of Public Information (DPI), expressed their satisfaction with the move taken by the government to reestablish Local Government Elections (LGE) after so many years; while noting that they appreciate the opportunity to elect someone whom they believe can contribute to the village and make representation for future improvements.

Sandvoort resident, Tricialla Victor said she is very grateful that an NDC was formed in her village so that residents will be able to exercise their constitutional rights and have a say in who manages their community. According to Victor, with the village having an NDC, more development will be welcomed in the village.

Victor, who is also the APNU candidate for Sandvoort Village, pledged to develop her village and improve the lives of both young and old residents. Victor says among her plans for the village is the construction of a reactional park, clearing of drains and ensuring proper irrigation in every part of the village.  Victor, who is optimistic about receiving the support of the villagers said, “I will focus on developing our village and enhancing our environment.”

“This is a great idea! For so many years we were only voting for general elections, but this year comes with a difference since we will also be having our own NDC, I think things will happen in Sandvoort because the person will be right here and will be seeing our struggles,” one resident told the DPI as she made her way into the polling venue. 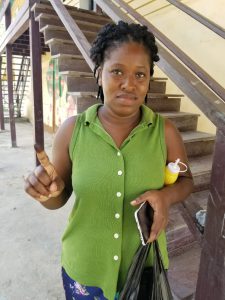 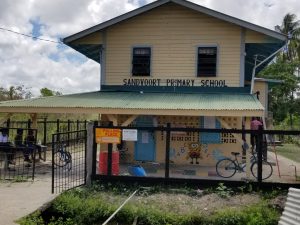 The Polling station in the village of Sandvoort where, for the very first time, residents are voting at a local government election

Staining his finger for the very first time at a local election is 21-year-old Denzil Southwell, who commended the Guyana Elections Commission (GECOM) for the smooth election process.

Donna Hinds, after casting her vote said that she feels proud to have participated in such a rewarding exercise and believes that by voting she has contributed to a better life for herself and other villagers.

Sandvoort village, known mostly for its agricultural practices will, effective from January 2019, be managed by a Neighborhood Democratic Council (NDC). The community was organised as a “Village Corp” several decades ago and never participated at Local Government Elections. However, months before the 2018 LGE the villagers turned the ‘Corp’ into an NDC which passed through Parliament as Wyburg/Caracas NDC.

This will be the first NDC to be established in the community which is the home of over 200 residents. The move is an initiative recommended by government representatives within the region and is expected to come to fruition at the starting of the New Year

Before the close of polls at 18:00hrs this evening, over 100 residents were expected to vote.