Georgetown, Guyana (February 28, 2018) In an effort to equip teachers, students and residents of Bartica with the technological skills that can assist in providing modern solutions to the challenges of transitioning Bartica, Cuyuni-Mazaruni (Region Seven) to the first model ‘green’ town in Guyana and the Caribbean as envisioned by President David Granger, the Office of Climate Change (OCC), in collaboration with STEM Guyana and the Caribbean Community Climate Change Centre (CCCCC) or 5Cs, yesterday launched the STEM Bartica Programme at two secondary schools in the region. Funding for this project is provided by the Italian Government. 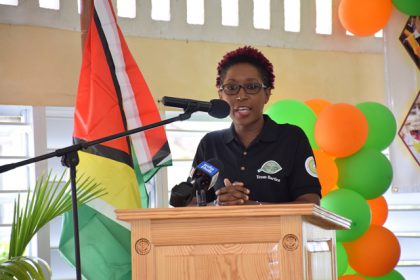 Head, Office of Climate Change, Ms. Janelle Christian during her address to the STEM students at the Launch of the STEM Pilot Programme in Bartica.

The programme is through the 5Cs support of a project called “Transitioning to National Energy Security” (TNES) for the Bartica community. It is being executed by OCC with the aim of establishing a reliable point of reference for the existing state of energy in Bartica.

Speaking at the launch yesterday, Head of the OCC, Ms. Janelle Christian explained that a pillar in the fight against climate change is the transitioning to renewable energy. As such, part of the planned programme under the sensitisation and awareness component, is the schools’ renewable energy hands-on activity.

“A large part of the work that is financed through the…Italian Government in collaboration with the Caribbean Community Centre for Climate Change is a component dealing with education and awareness… We often talk about our young people being the future but how do we get them involved? We need to build skills starting now. We need to build their confidence; we need to expose them to new technology, tools and concepts, so that they will be confident enough to fill those leadership roles that we often, so abstractly speak about. So the team did put a line in the budget for us to do tangible, hands-on project with the secondary schools in Bartica,” she said.

The OCC team had initially engaged the schools, councillors, regional representatives and the Mayor’s team in January of this year to bring forward and action the STEM program in Bartica. Through their collaboration with the STEM Guyana, a total of 12 teachers were trained from the Bartica and Three Miles Secondary Schools as well as two community members. The training, which was held at the Ministry of Public Communications’ conference room, was aimed at preparing the teachers selected from the two schools to pass on the knowledge gained to the students of the schools’ STEM clubs. STEM Guyana is set to provide support throughout the process for Barticians.

Assistant Executive Director, Caribbean Community Climate Change Centre (CCCCC), Dr. Mark Bynoe, shared similar sentiments during his address. “Today marks for us, our continuing efforts to aid Guyana in its efforts towards pursuing a green economy framework and using Bartica as symbol of this effort,” he said.

Dr. Bynoe added that the launch of the STEM programme demonstrates the importance that is placed on science, technology, engineering and mathematics which would build the capacity of a cadre of persons essential to catalyse the green economy ethos from policy to implementation.

Guyana transitioning into a green economy has been a major part of President Granger’s vision for the country’s development which he plans to achieve through ensuring that environmental sustainability is allied with economic development. Further, in keeping with the President’s vision for a green Bartica, the OCC and STEM Guyana have been tirelessly working with the Mayor and Town Council to make this vision a reality through actively engaging Guyana’s youths in the fields of on science, technology, engineering and mathematics. 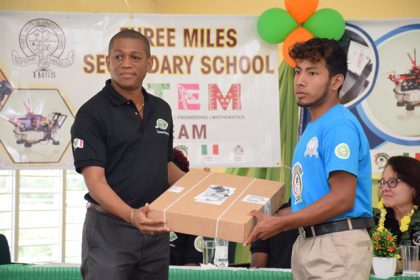 Assistant Executive Director, Caribbean Community Climate Change Centre (CCCCC), Dr. Mark Bynoe during his address to the STEM students at the Launch of the STEM Pilot Programme in Bartica. 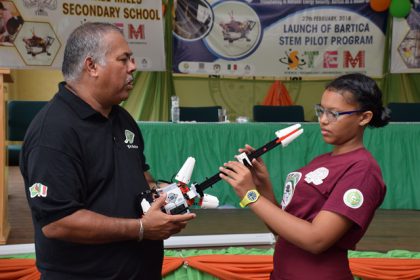