By the ending of this year, if not all, most of the United Nations agencies stationed in Guyana will be housed in one compound, as part of a reform agenda of the UN Development System to “Deliver as One” and to achieve coherence and efficiency in their business operations.

This is being made possible by the Government of Guyana, who earlier on Friday signed a Memorandum of Agreement on the UN House initiative, for continued strengthening of the partnership between the country and the UN agencies, its funds and programmes. 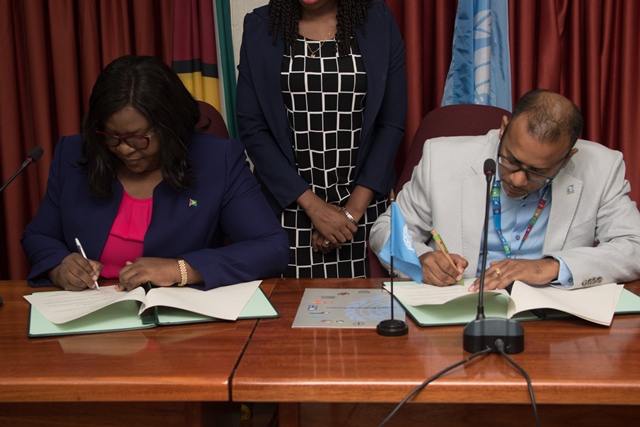 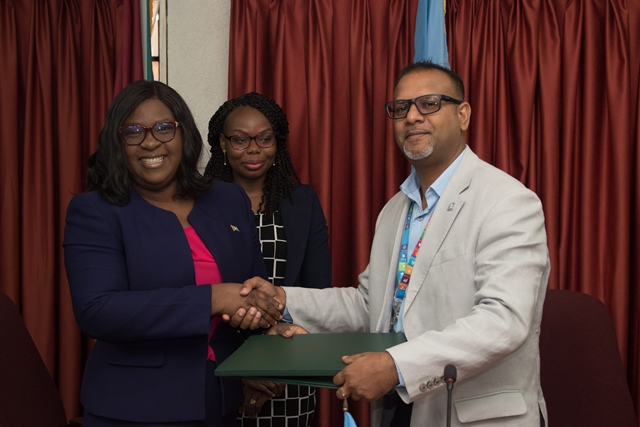 “We look forward to the continued partnership as development assistance from UN agencies, funds and programmes continue under the Country Implementation Plan as part of the Multi-country Sustainable Development Framework in the Caribbean for 2017-2021,” Minister Cummings stated.

Adding that the government and people of Guyana were pleased that the UN House advances the UN Development System reform agenda.

“Guyana is fortunate to be one of the four CARICOM countries of the Caribbean in which a UNDP country office is located. We will ensure that the United Nations in Guyana is adequately equipped to carry out its work and to even grow and expand its presence while enhancing its efficiency,” the Foreign Affairs Minister noted.

Through this partnership of a UN House, the government provided a common space for the UN Country Team to work closer together, and this, in turn, will foster an even faster response to national priorities.

Initial relocation began on May 2019 and according to local UNDP Officer in Charge, Navindra Persaud, agencies were progressively moving into their new space.

“We would like to thank the Ministry of Foreign Affairs for the finalisation of this Memorandum of Agreement. The UN Country Team is grateful to the Government of the Cooperative Republic of Guyana for the provision of the premises. Our thanks also extend to the National Assembly for its role in the budgetary allocations under MoPI to cater for the lease/ rental of this as part of the national budget that was approved on 15 December,” Persaud stated.

“The signing of the MOA puts our [government’s] word into to deed.” remarked Minister Cummings, who also noted that Guyana has been fully involved in the design of the new system and the restructuring of the Resident Coordinator and UN Country Team systems in order to better meet the specific needs of CARICOM Member States.