The switch from Wartsilla to the state owned company, Power Producer and Distribution Incorporated (PPDI), could result in millions of dollars being saved by the Guyana Power and Light (GPL) Incorporated.

At the swearing in of the Board of Directors of the company, Minister of Public Infrastructure, David Patterson, said the new company offers a better rate per megawatt than Wartsilla.

“The exorbitant rates imposed by multinational for the new operation and maintenance agreements which ranges between US$15.5 to

US$26.00 made this decision far easier. We estimate with the establishment of PPDI a savings of at least US$3.73 per megawatt,” Patterson said.

According to the minister, the board of PPDI was carefully selected and is efficient enough to execute the task at hand. The minister is confident that PPDI will maintain high standards.

“Delivering cost efficient service matching all the key performance indicators; heat rate, availability and lube oil consumption, these are key performance indicators and will be an integral part of the operations and maintenance agreement between PPDI and GPL,” the minister noted. He concluded by wishing the board members well and urged them to transfer their skills and previous successes to the oversight of PPDI.

The Minister noted that in the last two years the overhauling of the power plants was carried out by Guyanese who were able to execute it within 14-16 days.

Additionally, the minister said that PPDI will also be investing in people and equipment and will one day be the complete energy solution arm of the government.

Minister within the Ministry of Public Infrastructure, Annette Ferguson, indicated that she will be paying close attention on how the board performs over its two year lifespan. She charged the team to advance its ideas and vision to meet that of the government, which is to be green by 2025. 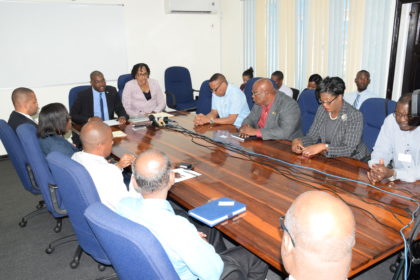 Minister of Public Infrastructure, David Patterson addressing the newly sworn in Board of Directors for the Power Producer and Distribution Incorporated

Chairman of the Board, Mark Bender, said PPDI has a host of competent workers it inherited from Wartsilla who will strive to achieve the government’s green economy.

He indicated that although PPDI is a new company, the employees are experienced and skilled to effectively provide the quality of service expected by Guyana Power and Light.

“The company is also expected to have an expanded role in the future as the government moves forward with its plan to provide electricity supply from clean and renewable sources of energy…Electricity coverage and reliable supply of electricity are key indicators of sustainable human development. PPDI is an important player in the electricity sector and must play its role effectively,” Bender explained.

The new PPDI Board of Directors includes Mark Bender as Chairperson, Aaron Fraser as Vice Chairman and Ronald Burch-Smith as Secretary. Other members are Harryram Parmesar, Stephen Fraser, Amanza Walton-Desir, Derlyn Klass, Permanent Secretary, Ministry of Public Infrastructure, Geoffrey Vaughn, and an Opposition party member who is yet to be named.