Sports Tourism is something that has always been supported and promoted by the administration. However, Director of Sports Christopher Jones is calling for representatives of the tourism sector – particularly hotel owners and providers of tourist packages – “to look further than filling rooms when they are involved in sports tourism.” 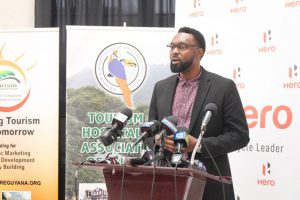 Jones was at the time speaking an event organised by the Tourism and Hospitality Association of Guyana and HERO Caribbean Premier League to promote sports tourism.

Guyana is currently hosting one of the largest sporting events in the world, the Caribbean Premier League and soon will be holding the Women’s T20 World Cup. Jones said that such major events should not just be seen as an opportunity to fill rooms and is calling for tourism stakeholders to take it a bit further and promote Guyana to the rest of the world.

Jones said that many of hotels and outlets that provide tourism packages have only “just scratched the surface.” Citing the Kaieteur Falls as an example, the Sports Director reminded that it is not the only local tourist destination. He noted many of the Caribbean islands have tapped into sports tourism and underscored that Guyana has everything they have to offer and much more.

“When Guyana boasts about having the longest single drop waterfall, we want people to not only hear about Kaieteur but go and visit. When we speak of Guyana having the largest birds of prey, we do not want persons to only see it in a magazine. We want them to go to those interior locations and experience it for themselves because after the sporting event is over, we are hopeful that those persons return to Guyana on their own or invite other persons to Guyana and promote Guyana through those mediums”, he stated.

Jones said that it is a fact that a large part of Guyana is undiscovered adding that it is time “we expose it to the rest of the world.”