Telemedicine for 2018 roll out in Guyana Minister Lawrence said 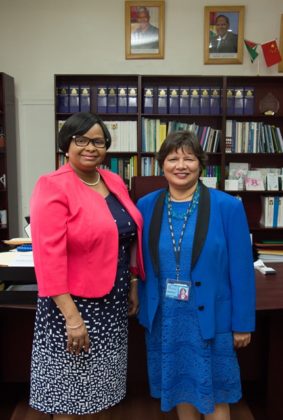 When this programme is launched it will cut dependency on the current Medivac services for interior residents, Lawrence told Chatterjee who promised to “look into this more to see if there are opportunities”.

The Canadian envoy said for her, public health is “very important” and she is excited to team up with Minister Lawrence.

“I am at the disposal of my government and yours”, Chatterjee said assuring that her tenure here will continue “our good relations with the government of Guyana,”

Chatterjee has accumulated a vast array of expertise in the area of development honed from her attachment as a specialist at the Canadian International Development Agency (CIDA). There, she helped design and implement some of the initiatives enjoyed by Guyana and other developing nations.

Minister Lawrence conveyed Guyana’s gratitude to Canada as one of the nations which has helped us “achieve our objectives” and predicts that Chatterjee’s incumbency will produce more “positive results” between the two friendly nations.

The Public Health Minister told the Canadian Diplomat that Maternal and Child Health (MCH) weighs heavily on her agenda and she wants a follow-up meeting to brief her on ongoing initiatives in the sub-sector.

Nevertheless, Lawrence used the opportunity to give Chatterjee a panoramic sweep of ongoing MCH initiatives in Regions 1 (Barima /Waini); Seven (Cuyuni/Mazaruni); Eight (Potaro/Siparuni) and Nine (Upper Takutu/Upper Essequibo) targeting the country’s indigenous populations who are currently being trained as Community Health Workers (CHWs) to ensure there are well-trained personnel in all villages to help monitor and evaluate pregnant women. 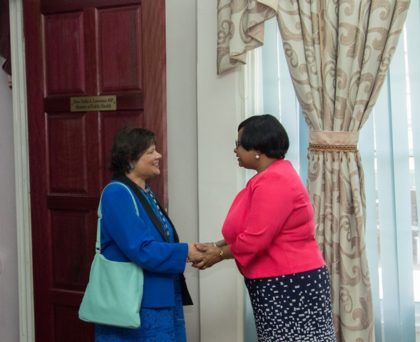 The programme, according to Dr. Ertenisa Hamilton, MCH Officer, is envisaged to reduce maternal, neo-natal, infant and child deaths here.

She said delays in seeking help, sloth in arriving for help and further holdups in receiving appropriate emergency care conspire to cause the deaths of Guyanese pregnant women.

The current MCH initiatives which have been backed by Canadian, UNFPA, PAHO/WHO support have seen the reduction of maternal deaths in Guyana, Hamilton said.

Chatterjee told Lawrence that she is “very impressed with how knowledgeable you are in the sector since you have only recently been appointed,” to the Public Health Ministry.