The Government of Guyana is sending the right signal to investors with its efforts to develop the emerging oil and gas sector, but must ensure that transparency prevails.

Raul Gallegos, Senior Analyst for Control Risks said on Thursday at the 26 La Jolla Energy Conference being held in San Diego, California, that transparency could be problematic for Guyana. 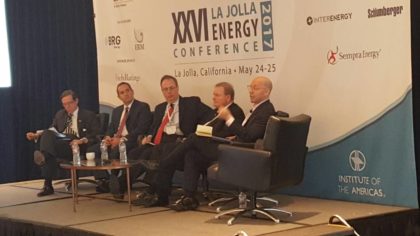 “In my experience over the years, as a journalist, if somehow you spend a very long period of time and you can’t really get some transparency and some basic sense of where the law is going, that’s…alarming,” Gallegos said during a plenary session on Latin America’s upstream prospects and outlook.

The Government of Guyana, since the significant oil find in 2015 by ExxonMobil and its partners, has been developing a regulatory framework to govern the oil and gas sector in time for production in 2020.

Those measures include putting in place several legislations that will see the establishment of a Petroleum Commission to regulate the sector and a Sovereign Wealth Fund to hold oil revenues.

Gallegos said there is still some “level of obscurity” that has the energy sector concerned as the country moves ahead with oil development. The government has committed to transparency and accountability in all government agencies and institutions.

The government is also in the process of applying for membership with the Extractive Industry Transparency Initiative (EITI) to promote transparency and accountability across the country’s extractive sector.

The La Jolla Energy Conference is an annual event hosted by the Institute of Americas (IOA). The conference was held from May 24-25.

Victor, who is a professor at the School of Global Policy and Strategy at the University of California San Diego, noted that the likelihood of corruption is “much, much harder” to manage in a world of high oil prices.

“I think the key problem is how to manage the revenue from the oil,” Victor said. Guyana has “a lot of lessons from Latin American Countries” as it continues preparations and development of the oil and gas sector Lisa Viscidi, Director of Energy, Climate Change, and Extractive Industries Programme at the Inter-American Dialogue, added.

The La Jolla Energy Conference brings together leading energy players to dialogue and debate energy sustainability trends. A media delegation from Guyana attended the conference and was part of an Energy Literacy workshop facilitated by the IOA.