(MOTP) Georgetown, Guyana – (August 25, 2016) President David Granger, was today, paid a courtesy call by Trinidad and Tobago’s Minister of Energy and Energy Industries, Ms. Nicole Olivierre and Deputy Permanent Secretariat in her Ministry, Mr. Andre Laveau. Guyana’s Minister of Natural Resources, Mr. Raphael Trotman was also present at the meeting, which took place at the Ministry of the Presidency. 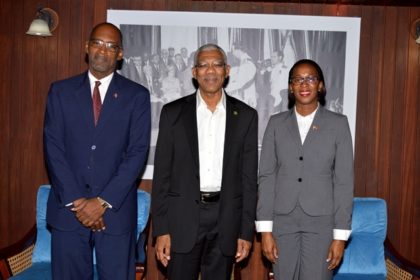 The Head of State said that as Guyana prepares to harness its oil and gas potential, the country is looking forward to technical support and cooperation from its CARICOM sister state. “There are mutual benefits to be derived. Trinidad has been very friendly to us in the Region, but we must be prepared to extend not just friendship, but concrete arrangements as well, which would benefit our Caribbean people; a new pattern of collaboration,” the Head of State said.

In this regard, Minister Olivierre spoke of the Memorandum of Understanding (MoU) that was signed by the former Administration in 2013 for cooperation in the energy sector and said that her Government is looking to continue that cooperation.

However, that MoU has since expired and President Granger has asked that it be reconceptualised and expanded to include other areas of cooperation such as agriculture, education, infrastructure and tourism.

Minister Trotman assured that the process of drafting and finalising a new MoU will move swiftly apace and said that this will be done at the level of the two permanent secretaries (Guyana and Trinidad) with the view of having something concrete by October later this year.