Parents and residents of the Wales community, Region Three were called upon by Minister of Public Security Khemraj Ramjattan be actively involved in their children’s education. The Minister was at the time delivering the feature address at the Wales Primary School graduation of 43 students, who recently wrote the National Grade Six Assessment (NGAS). 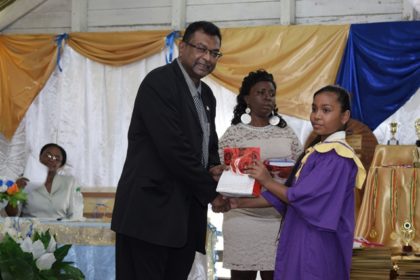 Minister of Public Security handing over a Collins school dictionary to one of the Graduation students of Wales Primary School.

Minister Ramjattan said that parents and other persons within the community will have to play a vital role in the lives of the students. “Businessmen, professionals in the area, parents especially, pay special attention to our young people now that they are going to go to secondary school, that we make provision” the Minister stated.

The graduating students were also urged by the Minister, to do a lot of reading, as the next five years of their lives is going to challenging. “This new era that you are going to enter into, the secondary school year as we call it, that phase of your life, I am urging you that you do read, read and read more. It is so important… the requirements today for knowing some science, knowing literacy, knowing mathematics and all of that is so fundamentally the preparatory work for you in the future,” Minister Ramjattan explained.

The government, the Minister says, will play its role to encourage reading among youths. He hinted that, “if it is a library 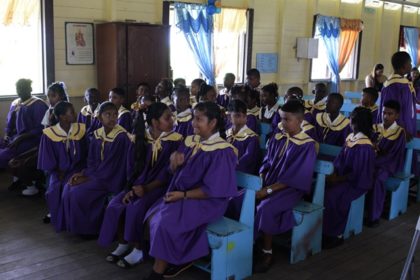 The 43 graduates of Wales Primary School.

through public-private partnership we have to open here, we are going to do that because it is so very important”.

Minister Ramjattan said that the results of the recently announced performance of the students, who wrote the NGSA, despite showing some improvements, indicated that there is lot of work that needs to be done,.  The Minister stated that “we have to do more in relation to making the curriculum more rigorous, especially in mathematics and literacy skills; giving children sustained attention and that must come not only from the teachers but also from parents and the community at large.”

In his closing  remarks to the students, Minister Ramjattan advised them to be honest, not to be quarrelsome and to appreciate their friends. The Minister told the students that cultivating good habits at a young age will make, “good citizens of Guyana”.

The Minister in an effort to encourage practice to what he preached about the importance of reading, gifted all 43 students with Collins School dictionaries.