The residents of Plaisance on the East Coast of Demerara have been assured that the future of Guyana’s youth is in good hands.

Director-General of the Ministry of the Presidency Joseph Harmon visited the community during the weekend and interacted with villagers.

He noted that the Coalition Government had invested heavily in the development and empowerment of young people countrywide in its less than five years in office. 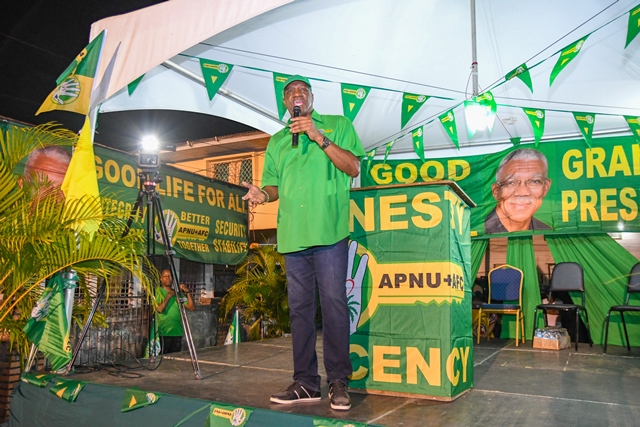 Director-General of the Ministry of the Presidency Joseph Harmon addressing the people of Plaisance.

DG Harmon pointed to the Guyana Youth Corps established by the His Excellency President David Granger as an example.

“The Guyana Youth Corps trains our young people with life skills, it prepares them for the world of work, and it allows them to get training that they can employ other young people,” he stated.

Harmon also listed other initiatives such as the Hinterland Employment Youth Service which has trained over 4,000 hinterland youths and seen the creation of over 2,000 small businesses and the Board of Industrial Training which provides occupational, technical and vocational skills training.

Other initiatives include the Youth Innovation Project of Guyana which offers avenues for young people to become entrepreneurs and the Sustainable Livelihood and Entrepreneurial Development which is supporting the expansion of the local economy in communities and aiding small enterprises.

According to the Director-General, these investments in young people are being made without the revenues from oil and gas.

“We did not need oil to recognise that our young people needed employment and that we needed to prepare our young people for the decade of development. Your future is secure under the Coalition Government.”