– Agri. Ministry to establish additional nurseries across the country

This is the first of two nurseries that will be commissioned before the end of 2020. The facilities are said to have the capacity to produce 25,000 additional seedlings per year.

The nursery at Kairuni, which was developed at a cost of GY$1.1M, is in keeping Government’s plans to promote and boost coconut production in Guyana. 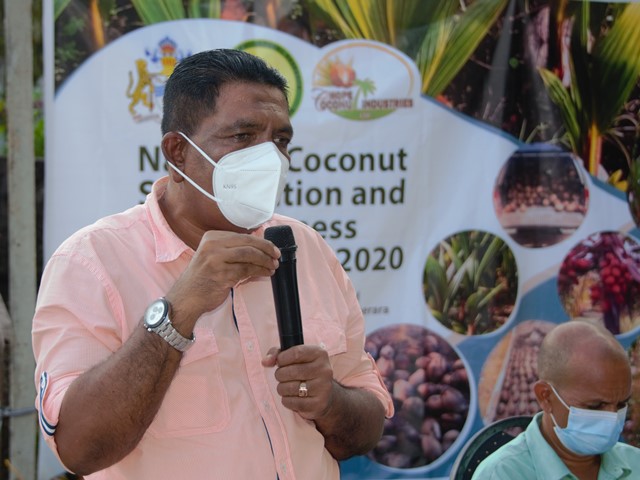 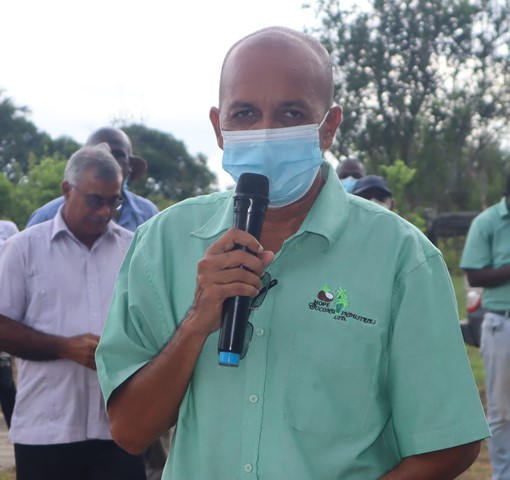 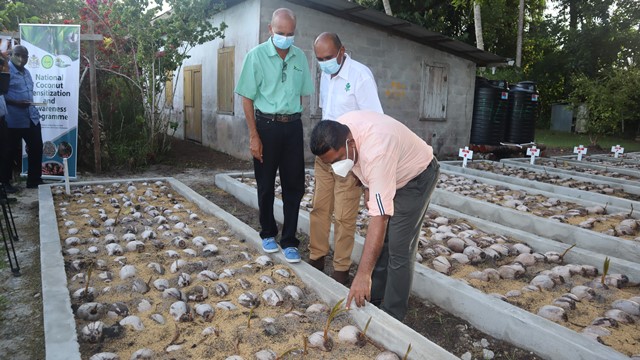 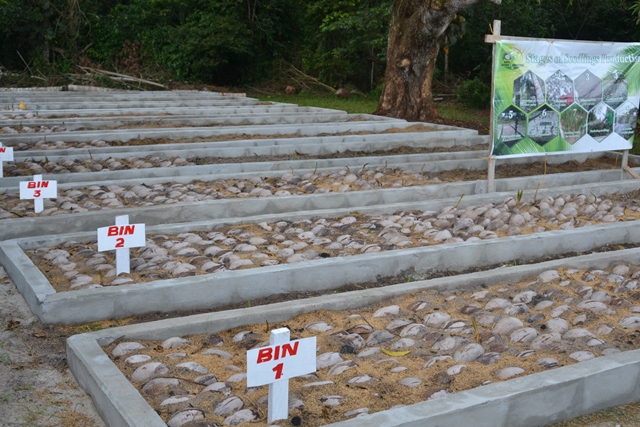 While offering remarks at the commissioning, Minister Mustapha said the Ministry is working to ensure proper coconut planting material is easily accessible to farmers across the country.

“At the Ministry of Agriculture, we are on the verge of developing the coconut industry. We’ve been invited to be a member of the International Coconut Community. We are working to have those arrangements finalised so that we can benefit from that platform in the coming year. Coconut has potential to contribute heavily to the development of our economy. That is why Government is putting the efforts, energy and resources into developing the industry. Over the next five years, we plan to decentralise the access of proper coconut planting materials. Today’s activity marks the first step in our decentralisation efforts. Farmers on the East Bank and Region 10 will no longer have to travel to the East Coast to purchase coconut plants. We will also be commissioning another nursery at Charity very soon. Next year, I plan to establish a nursery in Berbice and over time, move to other parts of the country like in the interior,” Minister Mustapha said.

The subject Minister also encouraged farmers to get involved in cultivating other varieties of coconuts available in Guyana.

“Based on the current demand, this nursery only carries the 18 months coconut variety at the moment, which is grown for the water. But I want to encourage you to also look at the other parts of the coconut, in terms of the nut, oil production and copra,” Minister Mustapha added.

General Manager of the Hope Coconut Industries Limited, Ricky Roopchand said the launch of the nursery marked an important day for Guyana’s coconut industry and the farmers of Regions Four and Ten.

“The establishment of this new coconut nursery, which is a new initiative under the Ministry of Agriculture’s programme at Kairuni, is indeed a step in the right direction. I’m sure you can all agree that it augers well for the continued development and expansion of our country’s coconut industry. We realised that one of the major constraints of the coconut industry was the lack of access to an adequate supply of good planting material. This nursery will be significant in addressing this issue. Farmers in Linden, the East Bank of Demerara and those along the Linden/Soesdyke Highway will now have easy access to adequate amounts of high-quality coconut seedlings at an affordable cost. The time taken and the long distances to travel to Hope Estate to purchase coconut seedlings, which many of you can agree is expensive, is now a thing of the past,” Mr. Roopchand said.

Coconut runs third in Guyana’s agriculture sector, after rice and sugar, and first in the country’s non-traditional sector in terms of earnings. It is also the third largest industry in Guyana, currently occupying about 25,000 acres.

Chief Executive Officer of the National Agriculture Research and Extension Institute, Dr. Oudho Homenauth encouraged farmers to explore inter-cropping while they wait on their trees to bear.

“When you plant a coconut tree, whether it’s the 18 months, the three years or the five years variety, you don’t get anything from it immediately. That is why one of the activities we are involved in currently is doing intercropping, of course with commodities or crops that have a market. That is what we’re promoting and you will see a lot more of that in place,” Dr. Homenauth said.

Caribbean Agriculture Research and Development Institute (CARDI) country representative, Jhaman Kundun said that given the progress made in Guyana’s coconut industry thus far, CARDI will be extending its research and development works for another five years.

“CARDI has been partnering now, for about four years under a regional coconut programme funded by the European Union (EU), promoting the resuscitation of the coconut industry across the Region, with Guyana forming a major part of that. Initially when we started, there were no coconut nurseries in the country and the Hope Estate was identified to streamline this initiative. We are happy today to see that it has taken on and decentralized into other parts of the country and this is speaking volumes to the importance of this crop. We are here to continue, mainly in the coconut sector, as we’ve gotten an extension of the project for another five years,” Mr. Kundun said.

Budget 2020 saw a sum of $1.25 billion was allocated to NAREI to aid the promotion of agricultural diversification with a focus on coconut, and horticulture by NAREI and the Hope Coconut Estate. In addition to the establishment of the two coconut nurseries at Charity and Kairuni, farmers will also receive training to establish their own nurseries.