The Guyana National Road Safety Council’s (GNRSC) action plan is scheduled to be launched on May 3, 2017 under the theme “The time for results; together we can save lives.” 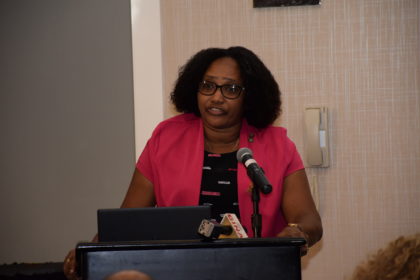 Minister in the Ministry of Public Infrastructure, Annette Ferguson

This was revealed today at the opening of a two- day road safety workshop hosted by the Ministry of Public Infrastructure in collaboration with the International Road Federation (IRF) at the Marriott Hotel, Kingston, Georgetown.

Minister within the Ministry of Public Infrastructure (MOPI), Annette Ferguson called on citizens to adapt a road safety culture to bolster road safety. 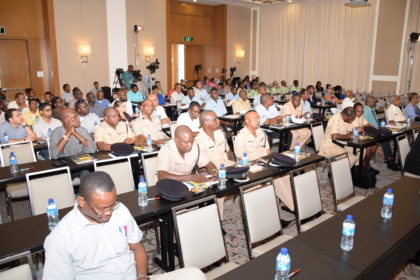 A section of the gathering at the Road Safety Workshop

Minister Ferguson told the gathering that drivers in many countries, as well as pedestrians, adhere to the road safety culture which helps to prevent excessive road fatalities. She explained that, “I am not saying that in those countries the drivers are not delinquent, but there is a higher form of safety culture.  In Guyana, we need to improve on our safety culture, road users need to think safety first, one will agree that road safety cannot be done in isolation and therefore we must all contribute to its enhancement.”

The Minister pointed out that the various government ministries and agencies have been addressing road traffic accidents. She pointed out that her Ministry has been doing its part to address the five risks in road safety; speed, drunken driving, use of helmets, seat belts and child restraint.

“…The Ministry of Public Infrastructure has been working to ensure there are proper and adequate road signage, road markings, installation of raised pavements, street lights, traffic lights, placement of speed humps, consistent road maintenance, and to ensure road users are guided properly. We are now planning to start construction of overhead passes,” Minister Ferguson highlighted. 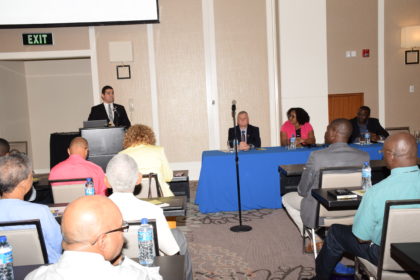 Director, IRF, Esteban Salinas echoed the words of Minister Ferguson, adding that it’s better to not wait until a fatality occurs before action is taken or one changes his or her behaviour.

Salinas said, “There’s something that will take a little longer to change but there are some things that we can change in the near future almost immediately; some of it has to do with regulation, road infrastructure, (and) adjustments that have to be made.”

Senior Project Engineer-Maintenance/Safety/Traffic, Hinds explained that for the last 10 years there has been on an average 128 fatalities from 114 accidents. Over the years, these fatal accidents cost Guyana in excess of US$13.2M. “In 2004 with financing from the Inter- American Development Bank, a consultant did an assessment on road safety in Guyana and it was detected that for every fatal accident it was costing Guyana US $60, 000,” Hinds explained.