Minister of State Joseph Harmon made the announcement today, at the media post-Cabinet briefing at the Ministry of Presidency. 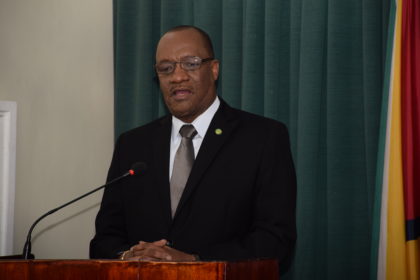 The country’s participation in the meetings is intended to build capacity to develop a national work plan as well to interact with the International EITI Secretariat World Bank representatives and Suriname multi-stakeholder group in pursuit of an International EITI membership, the minister explained.

Minister Harmon noted that the, “Guyana EITI intends to submit its candidature application to the International EITI board in time for it to be placed on the agenda for its next conference to be held in October”.

EITI is an international body that was established in 2003, with the aim of making it harder for governments and companies to hide the truth about the proceeds garnered from the extractive industries.

Cabinet also granted its approval for Guyana Police Force (GPF) Assistant Superintendent Steven Telford to participate in a hemispheric workshop for cybercrime prosecutors and investigators that is being hosted by the Organization of American States (OAS) in Miami, United States of America (USA) in August 22 to 23.

The Minister explained that the workshop is aimed to, “provide participants with an advance understanding of the operations of the internet and ways to preserve and utilise the wide range of digital evidence that might be encountered in computer related offense.

Minister Harmon said that cabinet granted its approval  to Guyana’s Caribbean Development Bank (CDB) Director of the Board of Directors, Sharon Isaacs and Tracy Blair from the Ministry of Finance attendance to the 277th sitting of the CARICOM Development Bank Board of Directors as well a meeting of its Oversight and Assurance Committee in Bridgetown, Barbados from July 18 to 20.

The forum will serve as a technical advisory group to the Caribbean Agriculture Health and Food Safety Agency which t works to protect the Caribbean from the spread of pests that could act as a barrier to trade, the minister explained. He noted that the participants are expected to, “discuss and share information related to plant protection and capacity building for pest diagnosis and identification.”

Additionally, cabinet granted its approval for the Geography Information System (GIS) Manager of Natural Resource- Geospatial Information Management Unit and System Engineer at the National Data Management Authority to attend a training programme on the development of Spatial Data Infrastructure (SDI) at the National institute of Geography and Statistics of Mexico from July 17 to 21.

The Minister said that it is expected that the skills acquired from the training programme will assist the government to expand the use of geographic information for decision-making within the Natural Resource Sector.

Cabinet granted its approval for Post Mistress General, Karen Brown, Public Relations and Marketing officer, Talisa King among other representatives from the Guyana Post Office Corporation to attend a workshop on the Universal Postal Union Operational Readiness for eCommerce in Barbados from July 10 to14.