Caribbean Leadership Project to kick off on September 12 – PS’, senior gov’t managers to be trained

Minister of State, Mr. Joseph Harmon, today, received a courtesy call from the Canadian High Commissioner to Guyana, Mr. Pierre Giroux and the team that is in Guyana to kick-start the Caribbean Leadership Project, which will see the training of top level managers and Permanent Secretaries of the Government in functional areas. 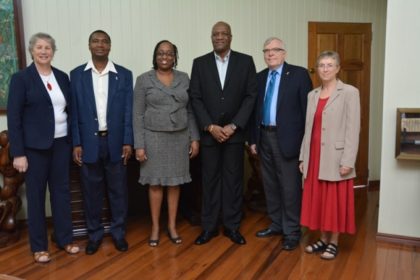 The Government of Guyana has partnered with the Government of Canada to implement the Project, which has a curriculum focused on the areas of service delivery, leadership, administration transitions and team building, in keeping with its policy to ensure an efficient public service.

Minister Harmon expressed his appreciation to the Canadian Government for the initiative, noting that the Guyana Government is pleased that its drive for a professional, efficient public service is being supported.

The seven-year project in the Caribbean is funded by Canada, and is aimed at training and enabling public and civil servants to deliver a high standard of service at a cost of almost $20 million. It will commence on September 12, 2016 and will run for five days. The Project is being headed by Dr. Lois Parkes, Regional Project Manager of the Caribbean Leadership Project, Cave Hill School of Business. 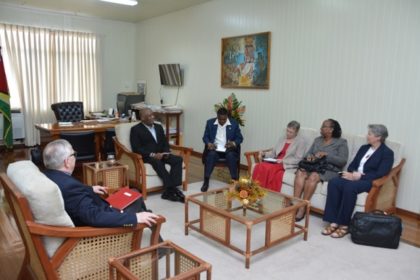 Minister of State, Mr. Joseph Harmon in discussion with the Canadian High Commissioner to Guyana and the Caribbean Leadership Project team.