Georgetown, Guyana – (March 2, 2017) President David Granger, yesterday, met with the Carter Centre’s Country Representative, Mr. Jason Calder, who updated him on the status of the US$297,000  Extractive Industries Transparency Initiative (EITI) project, which is being spearheaded by the Centre. EITI is a global standard to promote the open and accountable management of oil gas and mineral resources. The standard seeks to address the key governance issues of the oil, gas and mining sectors. 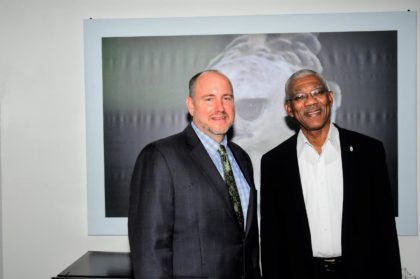 Speaking at the State House meeting, Mr. Calder informed that a multi-stakeholder committee has been established consisting of representatives from the Government, civil society bodies and the extractive industry. The committee is responsible for supporting the preparation of a candidacy application and detailed work programme for submission to the EITI Secretariat to ensure Guyana’s membership in the body.  “This basically says that here are some of the things we have to change in order to facilitate the kind of reporting that the EITI envisages for the various sectors,” Mr. Calder said.

Once Guyana’s candidacy is approved, the country will have a period of 18 months to present its first EITI report. The overall objective is to improve transparency, accountability and good governance in relation to the extractive industry. The Country Representative also informed the Head of State of a Constitutional Reform project that is in the works for Guyana and which will be rolled out during the course of this month. In this regard, he said that they have been working closely Prime Minister Moses Nagamootoo under whose purview constitutional reform falls.

Under the project, the Centre will be embarking on a series of events to engage the public as well as private stakeholders on the process of constitutional reform. President Granger emphasised that this process shouldn’t be about cherry-picking constitutional provisions, but rather it must be done in a holistic manner and must deal explicitly, with the issues and rights of women, children and other vulnerable groups.

“Guyana needs a simple and readable Constitution…This is an important process for us and I have insisted at the level of Cabinet that the process be done thoroughly,” the Head of State said.